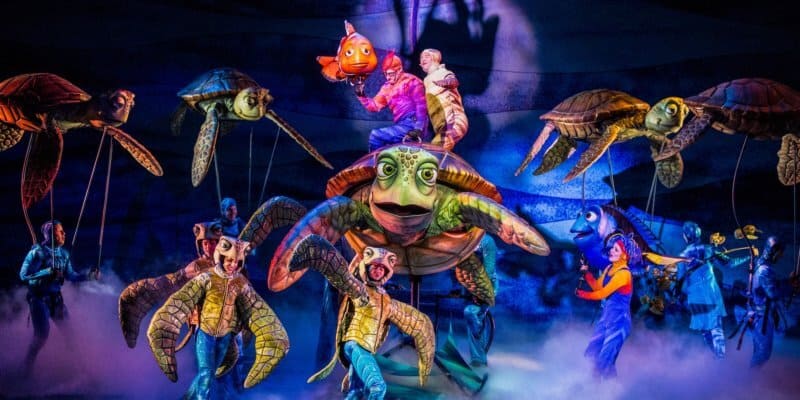 Disney’s Animal Kingdom Park at Walt Disney World Resort has been home to Finding Nemo the Musical since its opening day on January 24, 2007. Swimming into the Park with scenes inspired by the film of the same name, the 40-minute stage show brought characters to life in the Theater of the Wild. Now, we have found out from the show’s star actors that the show as we knew it — which has not been offered since before the pandemic — will not reopen.

Since publishing this article, Disney has released a statement confirming that a reimagined version of the Finding Nemo stage show will debut in 2022. Disney announced that the reimagined show “based on the same beloved characters” is still in the early stages of development.

Because the previous version of the show has been shuttered, performers took to social media to share the news of the show closing as well as their goodbyes.

Through a series of Instagram posts from the show’s Cast Member theme park stars, we get confirmation that Finding Nemo the Musical will not reopen. The show did not reopen with the rest of Disney’s Animal Kingdom theme park last summer following the temporary theme park closures in 2020. Still labeled as “temporarily unavailable” on Disney’s site, the stage show drew huge crowds over the last fourteen years and created memories for thousands of fans at Disney’s Animal Kingdom Park.

Many of the performers shared their feelings with loyal fans and those seeking to know what was going on with the production. Below we have included the Instagram posts that these performers have shared with the hashtag #WeSwimTogether as a tribute to their time on stage.

Jacob McAlister voiced his goodbyes on Instagram today (handle of @youfoundJacob), mentioning that Crush changed him for the better over the last ten years. Commenters on the post offered condolences and told him that he needed a tiny Crush tattoo to remember his time on the stage.

Other actors from the stage show also took to Instagram to weigh in on the show’s closure.

Actresses that lend fins and voices to the blue tang character, Dory, shared their heartfelt feelings. Katie Whetsell is one of those voices, saying,

Thank you so much to all of the guests and fellow cast members who made Finding Nemo-The Musical one of the most special experiences at Walt Disney World! This news is hard. All endings are. But out of them come new beginnings, and I know my gal Dory has taught me to look at fearful situations as an opportunity for adventure. So here’s to whatever comes next! Oh yeah, and the magic? The magic comes with us. #weswimtogether

Playing a “forgetful fish with a big heart” was Christina Sivrich. She loved being a part of this amazing musical and is sad to depart.

My heart goes out to my Nemo family today. I made some incredible memories during my time there and met some amazing people. You all so totally rock.

Take your fins and family and dive right into this “big blue world!”

Did you enjoy Finding Nemo the Musical while it ran? What do you think of the show being closed? Leave us a comment below!

Take a tip from Marlin and Nemo… travel into the unknown with new activities at Walt Disney World. The Disney authorized vacation planners at Academy Travel can help you swim off to new adventures and “touch the butt!” You’ll try something new each trip with their free planning assistance. Call them at 609-978-0740.