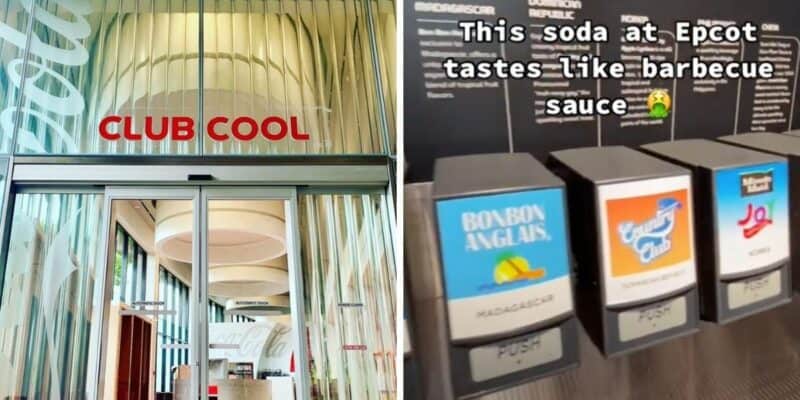 Fans did not hesitate to visit EPCOT earlier this month when the new and improved Club Cool officially opened. Not only does the new Club Cool have a completely different design, but it also offers Guests brand-new Coca-Cola flavors from around the world!

Fans were excited to see the Beverly make its return as when the old Club Cool was open, many took to social media to partake in the Beverly challenge. Now, we may have a new challenge on our hands as one of the sodas apparently tastes like barbecue sauce. In fact, many are saying that the Beverly is a “treat” compared to this new soda.

For starters, at the newly designed Club Cool, Guests can sip on popular Coca-Cola flavors from around the globe including:

As we mentioned earlier, fans were excited to see the Beverly make its return so they could once again partake in the Beverly challenge. Now, however, we may have a new challenge on our hands as one of the new sodas being offered apparently tastes like barbecue sauce.

Beverly is a TREAT compared to this 🤮 #ThatCloseMessenger #epcot #clubcool #disneyparks

Beverly is a TREAT compared to this 🤮 #ThatCloseMessenger #epcot #clubcool #disneyparks

♬ Why is it spicy – Kaylan Jarry

Can you believe there may actually be a soda that is worse than the iconic Beverly? Be sure to swing by the new Club Cool in EPCOT to try it for yourself!

Have you tried the Smart Sound Plum from China at Club Cool? Do you think it is worse than the Beverly? Let us know in the comments below.

Do you want to plan a trip to EPCOT to visit Club Cool when it opens? Start planning your magical vacation today!

Comments Off on New Club Cool Challenge? Fans Found a Soda That is WORSE Than Beverly