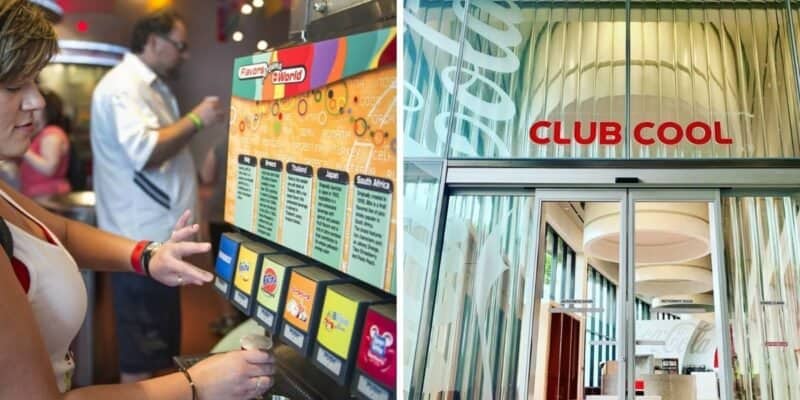 Beverly fans, get ready because Club Cool is returning to EPCOT with a new and improved look, but the best part is we have confirmation that it will debut “very soon”!

Thanks to Disney Imagineer Zach Riddley, we not only have a sneak peek at the upcoming Club Cool, but hints at when exactly Guests will be able to take on the Beverly challenge again.

Zach Riddley took to Instagram to share more details, as well as a sneak, peek at Club Cool. He writes:

Club Cool is nearly BACK at EPCOT, and in that process of becoming, I’m proud to share a sneak peek at the new façade and marquee from the park this morning!

This new portal features some fun touches that tie to EPCOT and Coca-Cola’s design legacy. The Club Cool marquee uses our EPCOT World Bold font and looks amazing in bright Coke red! The façade was inspired by classic green-hued glass Coca-Cola bottles and features the iconic Coca-Cola logo fully integrated into this dynamic design. When complete, this will be a can’t-miss destination.

Coca-Cola has been a part of the Disney Parks story since 1955 when ice cold Coca-Cola was served at Disneyland! In 1998 the first iteration of Club Cool, Ice Station Cool, opened its doors here at EPCOT. Since then, we’ve continued to reimagine this location and it has truly become a part of the EPCOT experience. Club Cool tells the uniquely EPCOT story about flavors of the world connecting people globally – where Guests can taste test popular Coca-Cola flavors from different countries including the beloved Beverly, which we can confirm WILL have a spot on the soda fountain upon reopening! 🤩

The team is busy putting final touches on this special space with some brand-new magic as part of the historic EPCOT transformation! We’re keeping details under wraps for just a bit longer as we approach the opening of Club Cool and our Creations Shop very soon.

We cannot wait for the new Club Cool to open up at EPCOT and see Guests take on the Beverly challenge once again! That’s right, in case you haven’t heard, it has been confirmed that the Beverly soda from Italy will be returning to the new and improved Club Cool!

Inside the Magic will continue to update you as we get information regarding Club Cool at EPCOT.

For reference, the old Club Cool was a spot for Guests to “cool off” and sample complimentary tastings of Coca-Cola beverages from all around the world. It was located in the Innoventions West building in Future World (which is now undergoing construction as EPCOT continues its complete overhaul).

Are you excited for when Club Cool comes back to EPCOT? Which drink was your favorite? Let us know in the comments below.

Do you want to plan a trip to EPCOT to visit Club Cool when it opens? Start planning your magical vacation today!