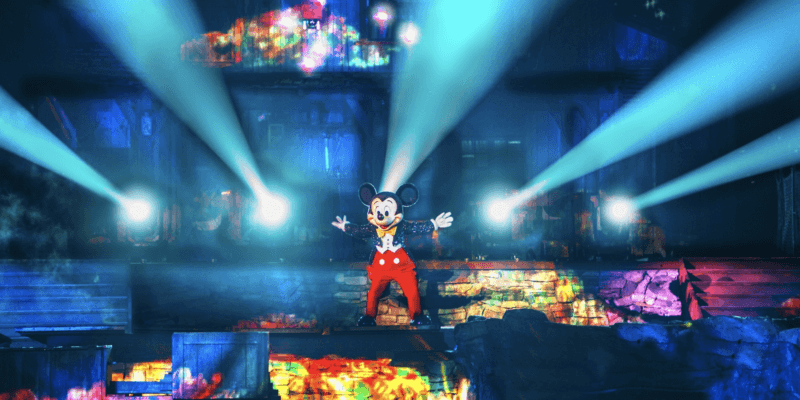 Note that Fantasmic! is a beloved nighttime show at both Disneyland Park at Disneyland Resort in California and Disney’s Hollywood Studios Park at Walt Disney World Resort in Florida. Just as Fantasmic! has not been running at Disneyland, so too has it been temporarily unavailable at Disney World. We’re continuing to update Inside the Magic as more information regarding the return of Fantamic! is released.

Maintenance on Fantasmic! Fountains at Disneyland

When visiting Disneyland this week, we noticed that some work is being done at the Rivers of America, the stunning waterway that runs throughout the theme park from Frontierland to Critter Country and back again. At this time, the Mark Twain Riverboat is down for a scheduled refurbishment, though the Sailing Ship Columbia is available for Guests to enjoy, and Tom Sawyer Island is open, as well. So, the refurbishment work within the river is not impacting the operations of the Columbia or the island.

We did notice, though, that there is, indeed, work being done within the river! In particular, Disney looks to be performing maintenance on the Fantasmic! fountains. Take a look at the most recent photos below:

If you are familiar with the Disneyland nighttime spectacular Fantasmic!, it it takes place on the Rivers of America. The show features water effects, and since it has been quite some time since Fantasmic! was on display at Disneyland, it makes sense for Disney to need to perform some maintenance on the fountains used for the Fantasmic! show. Hopefully, this is a good sign that Disney plans to bring back Fantasmic! sooner rather than later, though at this point, only time will tell.

At the time of this article’s publication, Disney has not yet announced when Fantasmic! will return to Disneyland Resort in California, nor has the Park shared details of this apparent refurbishment/maintenance work. The show is also not running at Disney’s Hollywood Studios at Walt Disney World Resort in Florida — read more here.

For more information on Fantasmic!, read the official description of this Disneyland show below:

Fast asleep, Mickey dreams he is the Sorcerer’s Apprentice. With a wave of his hands, he conducts scenes from Fantasia across enormous screens of water while brilliant sparks burst overhead. Pink elephants, swashbuckling pirates, princesses and more appear on and around the Rivers of America.

Discover the Thrill All Over Again

Do you hope Fantasmic! returns soon? Let us know in the comments!