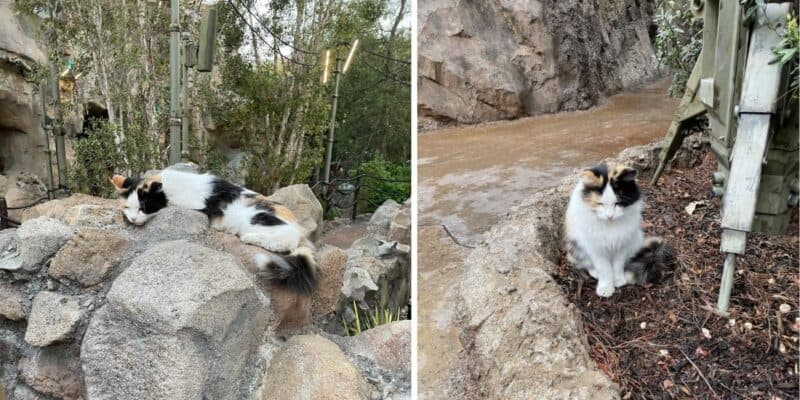 If you have ever heard of the illustrious Disneyland cats, you know that they are highly beloved by Guests and are also treated like royalty.

In case you have not heard of this, you read that right, Disneyland has multiple cats that roam around the property and get to live there full-time! The cats are around to help control rodent populations in the Park, and in my opinion, to enhance the Guest experience since they are just so dang cute.

Recently, it seems that one adorable cat has been hanging around Galaxy’s Edge at Disneyland Park, and she fits in quite perfectly. Andrea Lasso (@andreajessica) took to Twitter to post a photo of Cece (or Patches, depending on the Cast Member you ask) lounging in the Rise of the Resistance queue, fast asleep on the rock work!

Look at this Disneyland kitty sleeping on a rock in the Rise of the Resistance queue 🥺 pic.twitter.com/5OtaXsi3nT

Cece/Patches is one of the famous cats at Disneyland that locals have learned to love and know very well. She specifically enjoys roaming around Batuu! Cece/Patches is regarded as a very sweet cat that has gotten very used to all of the Guests, so you never have to worry about this spotted cat when you visit Disneyland.

As a note, Cece/Patches is one of many feral cats at Disneyland! There are over 200 cats that roam around the Park. As we have discussed in the past, the tale of the Disneyland Cats begins with Walt.

When Walt Disney decided that there should be an attraction inside the Sleeping Beauty Castle — what we know today as the Castle Walkthrough attraction — he brought engineers into the castle to begin the planning. But to his surprise, he was greeted by a feral cat colony that had made the castle their home.

Walt adopted each cat and made them Cast Members, as they served as the rodent clean-up squad! If you want to learn more about Disneyland’s cats, click here.

Have you ever seen any of the Disneyland cats when visiting Disneyland Resort?