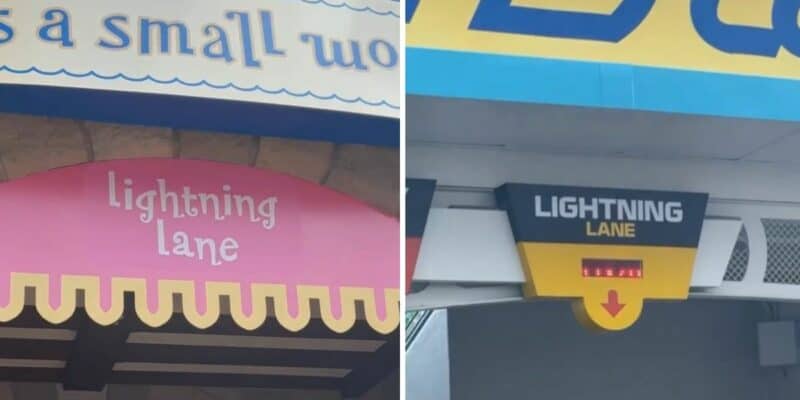 Recently, we have started to see FastPass signage disappear at Walt Disney World Resort. The changes began before Disney announced that Lightning Lane would take over FastPass with the new addition of Disney Genie+ on the My Disney Expeirence app. Still, now that things are official, new signage is going up… but it doesn’t look to be the permanent signage that we’ll see at Disney World for good.

As we mentioned, we have seen FastPass signage disappear off of many attractions such as Space Mountain, Jungle Cruise, Living with the Land, Kilimanjaro Safaris, and more. As we have discussed in the past, Disney Genie+ will be a paid system that will charge Disney World Guests $15.00 per person per day to utilize the Lighting Lane queue, which will be the old FastPass+ queue. Guests will be able to pick one return time at a time for select attractions and skip the lines when their turn arrives.

There will also be another option within the Disney Genie platform, allowing Guests to purchase a la carte single experience passes for more coveted attractions such as Star Wars: Rise of the Resistance or Seven Dwarfs Mine Train at an added cost. These rides will have their own added cost, which will differ depending on the date and attraction, and are not included in your Disney Genie+ purchase if you decide to purchase that offering as well

All of this is expected to begin at some point this fall — though an exact debut date has not yet been announced for Disney Genie, Disney Genie+, and Lightning Lane at Walt Disney World Resort in Florida, nor has one been announced for Disneyland Resort in California. However, with the 50th anniversary (The World’s Most Magical Celebration) beginning on October 1, some may speculate that Disney World will want to have that system in place before the festivities begin and more visitors descend on the Resort.

In order to do this, signage must be properly installed on each attraction so that Guests visiting know where to go if they have access to Lightning Lane, or they are not confused by the FastPass signage since that service is no longer in place.

Now, it looks like Disney is using new Lightning Lane decals to cover the old FastPass signage. The old signage was created specifically for FastPass, but things look a little more temporary since Lightning Lane is just repurposing those signs.

YouTuber Kyle Pallo took to Instagram to show off some of the new signage on display at Magic Kingdom. Below, you can see that “it’s a small world” has the sign with the same typography as the rest of the attraction.

If you look closely, you can see the rectangular border of the sticker. Tomorrowland Speedway also got some new signage. Guests seeing the sign up close have even noted that the old FastPass lettering is still indented and noticeable under the decal.

Again, at this time, Disney has not yet announced an official debut date for Disney Genie+/Lightning Lane at Walt Disney World Resort. However, seeing as the signage is starting to be placed over top of the old FastPass signs, maybe we will see the service debut soon, seeing as Disney said it would be coming this fall.

Additionally, perhaps in the future, Disney will completely remove the old FastPass signs altogether and replace them with more permanent Lightning Lane signs, so that the new name won’t be a cover-up and will instead provide a lot cleaner look.

What do you think of Lightning Lane and the new signage? Let us know in the comments below!