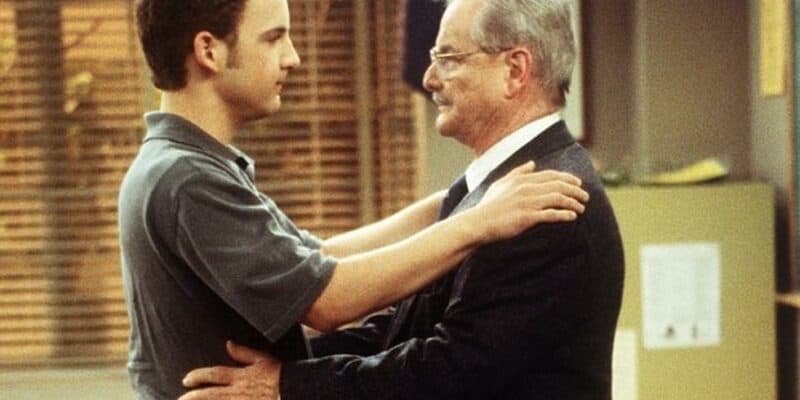 Boy Meets World was a popular sitcom that started in 1993 and ran for seven years until 2000. The show followed the lives of Corey Matthews (Ben Savage), Topanga Lawrence (Danielle Fishel), Shawn Hunter (Rider Strong), Eric Matthews (Will Friedle), and more as they navigated through their teenage years into adulthood. The show showcases all of the good, tough, and tragic aspects that we as humans face as we grow up, giving their audience something to related to as we grew up with them. The show even featured a Walt Disney World Resort episode!

Another iconic character from the show was Mr. Feeny (William Daniels), who played a teacher then principal at John Adams High and was neighbors with the Matthews. Feeny was always a nuisance to Corey but also was the one that all of the characters would visit for advice over the years. Now, a new theory has surfaced that states Mr. Feeny may not have been real at all!

The theory states that Feeny was always Corey’s guardian angel and even carries over into the new Girl Meets World spin-off.

Feeny’s presence has been a constant factor in Cory’s life since he started school. Whenever Cory needs advice to navigate this way through life, Feeny is always on hand to deliver sound advice. In later seasons, when there is no reason for Cory to still hang out with his sixth grade teacher, things almost magically rearrange themselves so Feeny can continue to watch over Cory and advise him.

Feeny’s presence even carried over to the spinoff show “Girls Meets World” (2014-2017), which had a grown-up Cory attempting to provide his daughter with life lessons. At the end of the first episode of the show on a subway station, Cory sees Feeny standing nearby smiling at him, before suddenly disappearing. All these facts have led some fans to surmise that Feeny is Cory’s guardian angel, one who will always manage to be there whenever Cory needs assistance.

There are aspects of this theory that are suspiciously accurate, especially the disappearance of Feeny in Girl Meets World‘s first episode. Personally, I think that in the spinoff series, this theory may be accurate to a degree.

Still, in Boy Meets World, since all the characters constantly interacted with Feeny, it would be hard to imagine he was dead and just a guardian angel to Corey since he has helped every character throughout the show in one way or another without Corey’s presence. One can argue that he was a guardian angel figure to everyone on the show, and that is why anyone could see him, but it is much more logical to state that he was simply alive.

What do you think of this Boy Meets World theory? Let us know in the comments below!