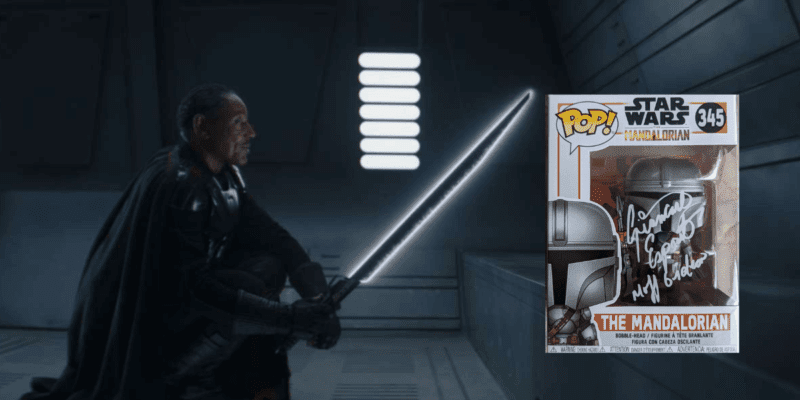 Can’t wait for the next season of The Mandalorian to debut on Disney+? We have a special treat to help you beat the waiting game. We are giving away one Mandalorian Funko Pop! signed by Moff Gideon himself, Giancarlo Esposito.

Check out how to enter the giveaway below… This is the way!

To enter to win a Mandalorian Funko POP! signed by Giancarlo Esposito scroll to the bottom of the page. The figure will be sent with a protective case around it so that the figure, packaging, and signature are well preserved.

After the dramatic end to season 2 that saw the return of Luke Skywalker, we cannot wait to see what comes next. Season 3 does not yet have a release date yet, but it could be coming in 2022! Giancarlo Esposito (Moff Gideon) recently said in an interview that:

“They just finished shooting Boba Fett and soon they will start on season three,”

The Book of Boba Fett

Before we get to watch the next season of The Mandalorian, we get a brand new Star Wars show on Disney+! The Book of Boba Fett will center around everyone’s favorite green bounty hunter and was revealed at the very last moments of the season 2 finale of The Mandalorian. The series will debut December of this year.

Undoubtedly there will be more Boba Fett Funko POP! figures released for The Book of Boba Fett. But before that, you will want to collect this Boba Fett figure released for season 2 of The Mandalorian.

You can pick up this Boba Fett Funko POP! here.

Feeling lucky? All you need to do to enter to win a signed Mandalorian Funko POP! by Moff Gideon himself is to fill out the form below. You will be contacted by email if you win so be sure to keep an eye out for Inside the Magic in your inbox. Be sure your email is correct before you enter.

After you enter you do have an opportunity to earn multiple bonus entries. These bonus entries are optional but the more entries you have the better chance you have of winning.

Best of luck, and may the force be with you.

Let us know what your favorite Star Wars Funko POP! is in the comments below!