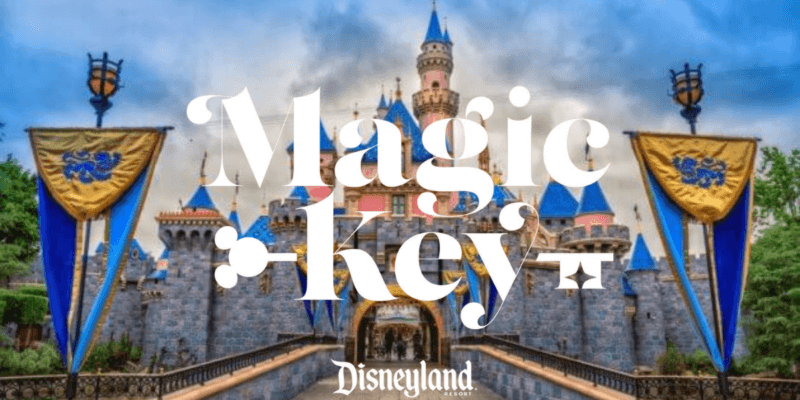 After waiting almost eight months, Disney finally released details of its reimagined Disneyland Annual Pass program, which is now being called the Magic Key Pass program. There are four levels of Magic Keys that will be available for purchase — the Dream Key, Believe Key, Enchant Key, and the Imagine Key (which is available to only Southern California residents).

In addition to releasing information on the new Magic Keys, Disney also revealed that they would be giving away special perks to Guests who purchased Magic Keys within the first 66 days of the Keys being released. 66 was the marker chosen as Disneyland Resort celebrated its 66th anniversary on July 17, 2021. One of those perks is a special commemorative pin celebrating the new Annual Pass.

Well, we now know exactly what that commemorative pin will look like! The official Instagram of Disneyland’s Magic Key program (@disneylandmagickey) shared a photo of the pin, as well as some more details.

As a #MagicKeyHolder, you can step through those famous gates again and again to unlock incredible memories. Join by 10/30 and receive a charter member welcome package with this commemorative pin and much more. Purchase your Magic Key pass starting 8/25. Who’s in?

Not only will Guests who purchase their Magic Keys early be given the exclusive Magic Key pin, but also they will also receive a special magnet — but a picture of that has not been revealed yet. There will also be an exclusive area for them to dine in Disney California Adventure Park — the area formerly known as the Alfresco Tasting Terrace will become Magic Key Terrace.

Since Magic Key purchases can be made online, it is most likely that Disney will mail these exclusive pins to Guests. When Disneyland had its old Annual Passport program, Guests would receive their coveted Annual Passholder magnets in the mail, so it would not be surprising to see the same thing happen with the new Magic Key program.

Will you be getting your Magic Key when they first go on sale so that you can receive your exclusive pin? Let us know in the comments!