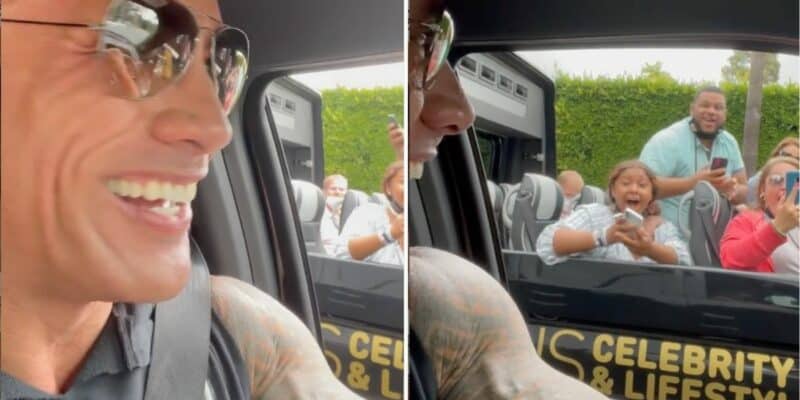 Imagine driving by WWE superstar and Hollywood A-list actor Dwayne “The Rock” Johnson and having him wave to you first? Well, that is exactly what happened to this group of Los Angeles tourists.

When you go on a vacation to a new state or a foreign country, oftentimes, there are tour busses available to bring you around if you don’t want to do all the exploring on your own. These tours often ensure that you can see key monuments or areas of the location you are visiting and take the pressure off of you when it comes to travel.

In Los Angeles, it seems that celebrities are considered as important as monuments or historical figures, as there are celebrity site seeing tours available. These tours look like others you may have seen, with Guests on a double-decker bus and a guide pointing things out, except they drive around areas with lots of celebrities living in it, likely pointing out where some live, and on the hunt to see someone famous.

Johnson noticed one of the tours driving next to him, and at a red light, he recorded a video saying that the tours were always driving around his neighborhood and that he wanted to say hi. He turned to them and said, “Hey, you guys know where I can find The Rock?” and instantly, screams were heard. Dwayne flashed a smile and clearly was not upset that there were people on a celebrity house tour, which some could argue is an invasion of privacy.

Hey you guys know where I can find The Rock?

Love pullin’ up in my pick up truck beside all these tour buses that tour my neighborhood and surprising the heck outta people!!!

One of the cool parts of fame & my job ~ makin’ a few folks happy.

Dwayne, of course, is a well-known celebrity. Not only did his time in the WWE give him fame, but his rise in Hollywood has been massive. With Disney alone, Johnson has played Maui in Moana and, most recently, Skipper Frank from Jungle Cruise alongside Emily Blunt, among others. This year alone, Johnson was the second-highest-paid actor for a single film. Johnson’s sweet demeanor often shines through as that of a big teddy bear, and this video once again shows just that!

What do you think of this story and Dwayne’s surprise entrance? Let us know in the comments below.