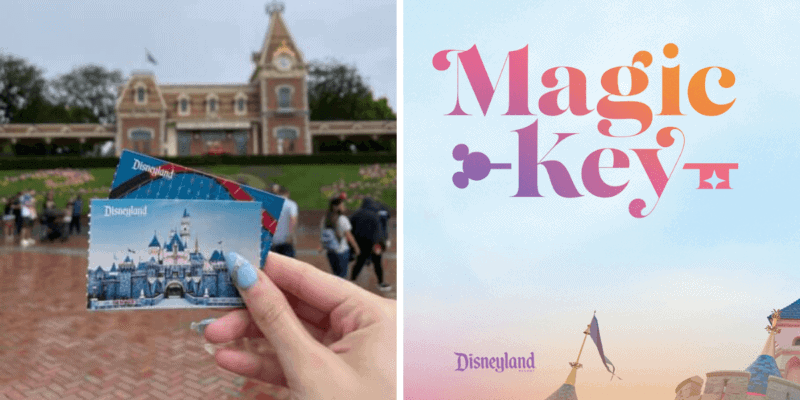 After over half a year without any information on a new Annual Pass program to replace the one Disneyland Resort ended in January, fans were finally given all the details about Disney’s new Magic Key program. The new Magic Key Passes will be available beginning August 25, and certain Guests will be able to upgrade their current Disneyland tickets to their Magic Key Pass of choice.

However, not all Disneyland theme park tickets are eligible for an upgrade. Here is more information on upgrades straight from the official Magic Key webpage on the Disneyland website:

There is a lot of important information in the paragraph above, but one of the most important things to know is what Disney means by “eligible Disneyland Resort theme park admission media”. Any full-priced theme park tickets that Guests have purchased, even if they have already been partially used, can be upgraded to a Magic Key.

However, there is one big group of people who are not able to upgrade their tickets to Magic Key Passes — those who purchased the California resident 3-Day pass, which, if you recall, came at a huge discount.

Back in early July, Disney announced that California residents would have the opportunity to purchase 3-day park tickets — available with or without the Park Hopper option — for as low as $83 per day. The single park per day ticket cost adults only $249 and the Park Hopper tickets were only $304. It is exactly because of that discount that the California Resident 3-Day pass cannot be upgraded to a Magic Key.

Only Disneyland theme park tickets that have been purchased at full price — such as a Tier 1-Tier 5 one-day, one Park per day ticket, a Park Hopper ticket, or a multi-day ticket — can be upgraded to any Magic Key Pass. Guests who have purchased the California resident ticket will have to purchase their Magic Key ticket at full price with the full down payment, as a California resident ticket is not eligible for an upgrade.

Remember: Those who are upgrading their current Disneyland ticket to a Magic Key will only have to pay the difference between their ticket price and the down payment amount required for the Magic Key, which is $179.

Magic Key Passes will go on sale beginning on August 25 and upgrades can also be made at that time.

Will you be upgrading your Disneyland ticket to a Magic Key Pass? Let us know in the comments!

CLICK HERE to book your Disney Resort vacation today with our friends at Academy Travel!