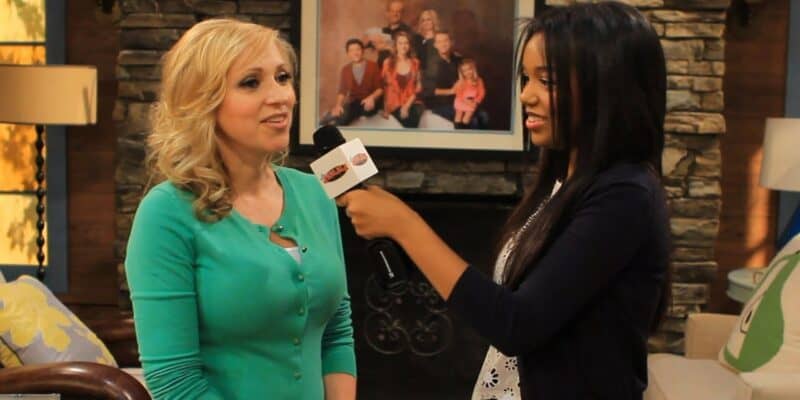 As the pandemic has continued to affect all of our lives, with new variants surging and mask mandates still in question, many Hollywood stars have been speaking up as to what side of the debate they adhere to.

Recently, Disney star and actress Leigh-Allyn Baker who played Amy Duncan in the Disney Channel show Good Luck Charlie, which aired from 2010-2014, went on an anti-mask rant at her local school board meeting, as she has school-aged children. Baker told the audience that she has “two vax-injured children, and they have medical exemptions after the seizures and the hospitalizations after all of their immunizations.” Although both children were granted medical exemptions in school, she would never place a mask on her children.

“And still, I would never put them in a mask because their brain needs oxygen to grow, which the neurologists can confirm. Anyway, the real part of the clown show is that you all think that you actually have the authority to mandate this. Because there are these books that I have and I have them as a gift for you: the Constitution, the Declaration of Independence, the Bill of Rights, the Federalist Papers and also the Bible. These guarantee my freedom and yours and our children’s to breathe oxygen.”

The room filled with fellow parents gave Baker a good response, cheering and clapping along to her speech, but once the video was leaked on Twitter, others did not agree as much as those in the video. But, even with the negative comments, Baker does not seem to be phased. In an interview with Fox, she said:

“[The response has] been everything from ‘you’re a hero’ to ‘you’re an evil villain. I mean, it’s run the gamut. I was canceled last July already for telling Joe Biden that masks aren’t law, that they’re an overreaching suggestion. They can’t cancel me twice. Or maybe they can try.”

Baker continued to tell Fox that she homeschools her children as she doesn’t want them to be a part of the “clown show” and that she has to constantly fight to have her and her family enter establishments without a mask on.

“I’ve been taking this up with restaurants that I go to and schools and everywhere because my children need to see my face when I talk to them. They need to see each other’s faces and their teacher’s face so that they can fully learn and comprehend and express themselves.”

Baker’s voice can be heard as multiple characters in Mickey Mouse Mixed-Up Adventures. She has also done voice work for the Disney Channel animated series Star vs. the Forces of Evil and the Disney Junior series Jake and the Neverland Pirates.

If Baker visited Disney World, she would have to wear a mask indoors as the company mandates it. Disney has also just changed their rules when it comes to Disney Cruise Line vaccination requirements. Due to the Bahamas not allowing ships to port as of September 3 if there are unvaccinated Guests aboard, Disney now requires all Guests to be fully vaccinated. This will allow the ships not to change their itineraries and for Guests to still be able to visit Castaway Cay.

What do you think of this ongoing story? Let us know in the comments below.