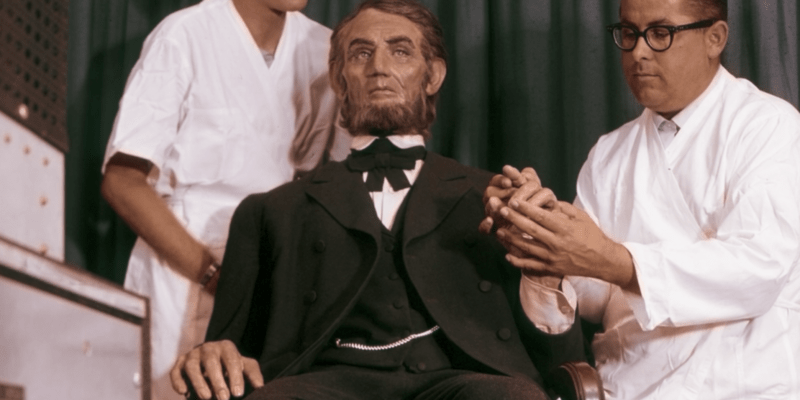 Behind the Attraction is a new Disney+ series that features classic Disney attractions in 10 different parts. Each episode highlights a different Disney Parks attraction, including Space Mountain, Jungle Cruise, Haunted Mansion, and most recently, Great Moments with Mr. Lincoln at Disneyland and the Hall of Presidents at Magic Kingdom in Walt Disney World.

In case you didn’t know, both Great Moments with Mr. Lincoln and the Hall of Presidents were inspired by the 1933 Chicago World’s Fair. One exhibit displayed wax figures of all the U.S. presidents, each with recorded voice tracks that explained what their role, specifically, was in American history.

Walt Disney loved this idea and wanted to bring the U.S. presidents to life at the Disney Parks with the help of Disney Imagineers.

However, as the Disney+ episode pointed out, creating the animatronics wasn’t an easy process. In fact, when Imagineers were trying to make the Lincoln animatronic work for Great Moments with Mr. Lincoln, they ran into several problems — one of them being Mr. Lincoln continuously throwing a fit as he flung his arms around and even smashed his chair!

Disney historian Bill Cotter also weighed in during the episode, saying “Mr. Lincoln would sit in his chair, he started to get up, and all of a sudden he would go on this robotic fit, and he’d fling his arms around and would literally smash his chair into kingling. They would go and get him another chair, and he worked two or three days in a row. They would bring the press, and he’d stand up and smash the chair into kindling.”

Eventually, the Imagineers figured out what was causing the problem — a nearby World’s Fair pavilion called the Tower of Light. The pavilion was shining a giant beam into the sky, which, in turn, was creating an “electronic anomaly” that caused the Lincoln animatronic to not work properly.

“When they fired this thing up, the transient circuits that would go through the ground made Mr. Lincoln get feedback, and he’d go crazy and smash his chair,” Cotter explained.

It took nearly three weeks before Imagineers discovered this, but once they figured out the problem, Disney could finally open Great Moments with Mr. Lincoln and amaze Guests with this innovative technology.

D23 describes this attraction as:

Disney’s Audio-Animatronics® version of our 16th president first addressed audiences in the State of Illinois pavilion at the 1964-65 New York World’s Fair before settling in at his new home in Main Street’s Opera House in Disneyland. In the words of Walt Disney, “Ever since I was a small boy in Illinois, I’ve had a great personal admiration for Abraham Lincoln. So when we decided to recreate some of the great moments in Mr. Lincoln’s life for the World’s Fair, we directed all our energies to that task. We wanted to bring to the people of today, the inspiring words of the man who held this nation together during its moment of greatest crisis, the Civil War.” In 1973, the attraction closed to make way for The Walt Disney Story, but due to popular demand our 16th president returned to the opera house in 1975. In 2005, President Lincoln again took a vacation when the documentary movie Disneyland: The First 50 Magical Years debuted.

Behind the Attraction is streaming now on Disney+.

Did you know that Imagineers had trouble creating the Lincoln animatronic? Have you watched the new Behind the Attraction episode yet? Let us know in the comments below.