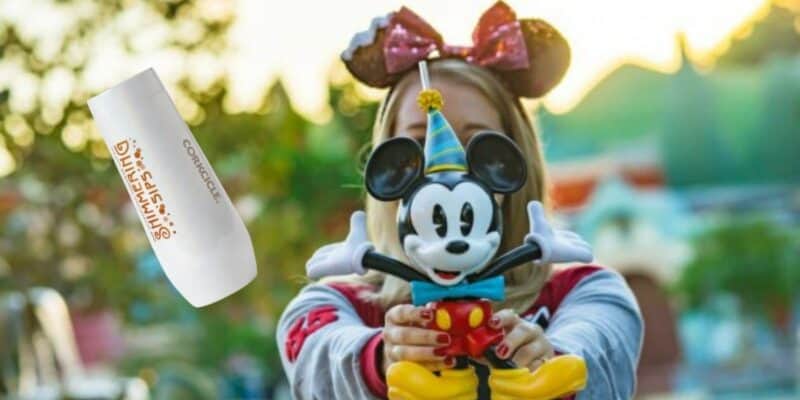 If you are a fan of Disney food, you definitely dream about all of the festivals at EPCOT which give Guests delicious delicacies from around the world, all in one place.

At the moment, EPCOT’s International Food and Wine Festival is underway, and Guests may have noticed that a new form of drinkware has been available for purchase! Corkcicle has done a few brand deals with Disney, as we have seen with their Star Wars collection, but now Guests have started to see their product in the Park much more often.

With the start of the Food and Wine Festival, which is presented by Corkcicle, many more Disney-themed designs have entered Magic Kingdom, EPCOT, Disney’s Animal Kingdom, and Disney’s Hollywood Studios. Now, Disney has announced that Corkcicle will be sticking around as the Official Premium Drinkware of Walt Disney World.

@Corkcicle is now the Official Premium Drinkware of @WaltDisneyWorld! This new relationship kicks off with the EPCOT International Food & Wine Festival Presented By Corkcicle, happening now through Nov. 20! #TasteEpcot

We already have seen specialty beverages at the Food and Wine Festival have the option to be served in a souvenir Corkcicle cup at Shimmering Sips; however, the cost is dramatically higher (around $20.00 more) than what the drink would cost on its own. Now that the partnership is official, we will likely see more of these souvenir opportunities appear throughout the Park.

It will be interesting to see if drink costs become more expensive for souvenir cups if Disney is deciding to make Corkcicle their official drinkware, which could mean it would replace plastic souvenir options that Guests may be used to.

Disney has not noted that they will be doing away with their fun collectible souvenir cups, but surely we will start to see a lot more Corkcicle options throughout Disney World. Disney also noted that this is their “premium” drinkware, so the plastic sipper may just be an option below that category. Although it is hard to imagine a world where collectible sippers are not available, we could potentially see less of them in an attempt to push the Corkcicle brand instead. As a note, this is all speculation at this point.

It should be noted that Corkcicle is a fantastic brand, and if Guests do spend extra to have the souvenir cup option, they will be doing so on a good product with heavy insulation that will keep their drink hot or cold much longer than any other plastic-style cup they were used to purchasing. Plus, with Disney-theming on the high-quality cup, who wouldn’t be swayed?

What do you think of this new partnership? Would you be sad to see plastic collectible sippers leave?