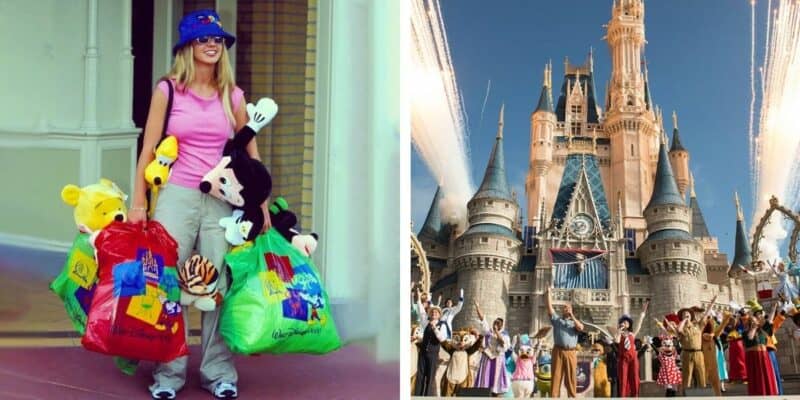 Do you ever walk off the Emporium at Magic Kingdom or the World of Disney at Disney Springs and realize you probably can’t fit all of your newly purchased Walt Disney World merchandise in your luggage that was already overflowing to begin with? We definitely know Britney Spears has.

Spears has had a rollercoaster of a career, but it started with the Mouse! In 1955 The Mickey Mouse Club was created, and in 1993, it starred newcomer Britney Spears as well as Justin Timberlake, Ryan Gosling, and Christina Aguilera. Aside from The Mickey Mouse Club, Spears has been mentioned in shows like Hannah Montana and Lizzie McGuire. She also has had her songs in various Disney Channel Original Movies and starred in Radio Disney Jams CDs on multiple occasions.

It seems that Britney is just like all of us Disney fans out there since she iconically once walked out of Magic Kingdom with seven massive (visible) plushies, as well as three giant Disney bags, which were all exploding — likely with more Disney plush characters. In the photo from her visit in 1999, Spears is flashing a big smile as she holds her newly purchased merchandise in hand.

Check her out in the Reddit post below by HollyHend-96. If this photo doesn’t scream, “Oops… I did it again”, I don’t know what does.

Britney Spears shopping for merch at Disney World (1999) from WaltDisneyWorld

Britney’s last trip to Disney (or the last trip she shared on Instagram) was in 2019 when she visited Disneyland with her two sons, Sean and Jayden.

Great time at Disneyland today …. but I don’t remember ever getting that wet on splash mountain 🏔!!! Geeez …. anyhow my boys are older now, so they don’t like their picture taken ever… so I was thrilled today when they said SURE !!!!! Such a great place !!!!!

Recently, Spears has been heavily featured in the media as she has fought her father, James Parnell Spears, to release her from his conservatorship over her. Over the past few months, trends such as #FreeBritney and #FreeBritneySpears have taken over the internet as fans have attempted to decode cryptic social media posts in which many felt Spears was crying for help. The legal battle between the two has been ongoing for quite some time, and now, her father has officially stepped down as her conservator.

“There are, in fact, no actual grounds for suspending or removing Mr. Spears as the Conservator of the Estate,” court documents obtained by CNN stated. “It is highly debatable whether a change in conservator at this time would be in Ms. Spears’ best interests.” But he did agree to stepping back and acknowledged the public’s pressure. “Nevertheless, even as Mr. Spears is the unremitting target of unjustified attacks, he does not believe that a public battle with his daughter over his continuing service as her conservator would be in her best interests,” the documents said.

For a full timeline of her conservatorship battle, click here.

After everything the pop sensation has been through, we hope she is able to head back to a Disney Park soon with her family and enjoy some retail therapy once again!

What do you think of Britney’s spending spree? Let us know in the comments below.