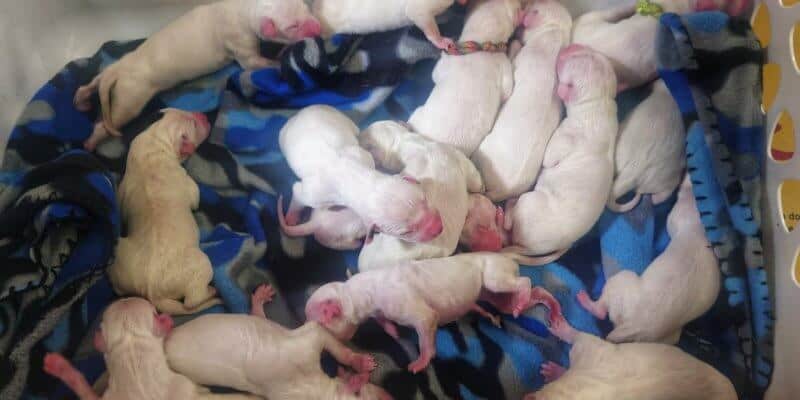 A Dalmatian in Texas and her owner had a real-life 101 Dalmatians moment in late June when the mama pup gave birth to an incredible 16 puppies! The owner of the Dalmatian, named Luna, brought Luna into the clinic after she had already delivered five puppies, but was struggling with the rest.

It turned out that Luna’s sixth puppy was in breach — which means that it was facing the wrong way for delivery. Due to that, the vets at the Fredericksburg Veterinary Clinic began delivering the puppies via caesarian section. It was then that they realized just how many puppies there were.

In an interview with Newsweek, Brittni Turner, a vet at the clinic, said that everyone, including the owner, was absolutely astounded.

In the end, 11 more puppies were born via caesarian section. “We kept miscounting the puppies!” Turner told Newsweek. “The owner was back there helping, our receptionist, our technicians. We pretty much had everyone back there helping. Finally, we counted that there were 16 puppies, and five of those were born naturally, which left 11 that we delivered by C-section.”

The litter’s birth was reported on the Fredrickburg Veterinary Center’s Facebook page.

It was all hands on deck this morning at Fredericksburg Veterinary Center for an Emergency C-section!

We always hope that intervention is not necessary for delivery, but unfortunately after delivering 5 puppies without issue one of the puppies became breech with its head turned backwards.

Dr. Turner and our wonderful team of technicians jumped into action and successfully delivered 11 more puppies by emergency caeserian section. There were puppies everywhere!! We are happy to report that all 16 puppies and mom are doing great following surgery. It wasn’t 101 Dalmatians, but it was enough for us to have our hands full this morning!!

While sixteen Dalmatian puppies may seem like a large number — and it definitely is — it is not the world record! That honor goes to an Australian pooch named Miley, who gave birth to eighteen puppies in May 2017.

While a number of Luna’s puppies were born via C-Section, which is a big surgery, Luna and the puppies are all doing fine and thriving.

What would you do if your dog had sixteen puppies? Let us know in the comments!