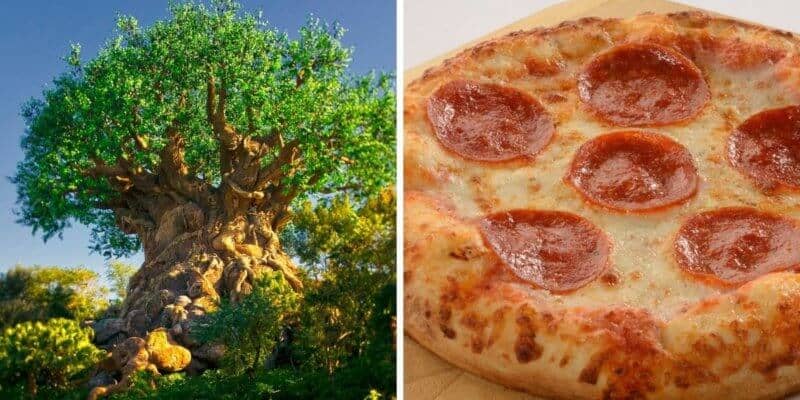 The Walt Disney World Resort is moving full steam ahead on prepping for its 50 Anniversary celebration. Decorations are being added to all four theme parks, photoshoots are happening for specialty merchandise, and now we know that more restaurants are opening! Hopefully, by the October 1 date, all of Disney World’s eateries will once again be seating Guests and offering more delicious meals.

Well, we now know that a popular Animal Kingdom location will be opening once again — and really soon! Pizzafari, located in Discovery Island has set a reopening date of August 2.

Fun animal murals and mosaics at Pizzafari Disney’s Animal Kingdom Theme Park are the colorful backdrop to a delicious quick meal beginning August 2, 2021. Pizza rules in this jungle but you can also order a Chicken Parmesan Sandwich, Green and Grains Salad, and an adorable “Spaghetti and Meatball” Cupcake. Kick back with a refreshing Blue Lagoon with blue curaçao beverage syrup, lemonade, and gummy worms – also available with a glow cube and with or without rum!

Pizzafari is a great spot for families wishing to escape the chaos of Disney’s Animal Kingdom without leaving the theme park and munch on some delicious pizza. While the dining location offers the traditional cheese and pepperoni, they also have an upgraded pie for a meat lover which includes both pepperoni and sausage. A delicious plant-based salad that has a variety of beans, olives, tomatoes, and a Green Goddess dressing.

For those with a sweet tooth, the adorable spaghetti and meatball cupcake is definitely a must. There is also a nice variety of drinks offered for the over 21 crowds, including the Blue Lagoon Lemonade made with Rum and containing a glow cube.

If you have not been to Pizzafari, but are interested in trying a new dining spot, here is some more information straight from the Walt Disney World website:

Make your appetite extinct with pizzas, salads, desserts and more—all while spying critters gracing a series of colorful murals and mosaics in 5 themed rooms. Draft beer, fountain drinks and other beverages are also available.

Pizzafari is one of the few Animal Kingdom restaurants that has remained closed since the theme parks reopened last summer. Only Caravan Road, Kusafiri Coffee Shop, and Restaurantosaurus remain closed at this time.

Disney also announced that the popular Yachtsman Steakhouse at Disney’s Yacht Club and Columbia Harbor House at the Magic Kingdom will both be opening on August 5.

Will you be visiting Pizzafari when it reopens at Disney’s Animal Kingdom on August 2? Let us know in the comments!

CLICK HERE to book your food-filled Disney vacation with our friends at Academy Travel – an EarMarked Diamond travel agency that can provide you with a free quote today!

Comments Off on Popular Animal Kingdom Location Opening in DAYS!