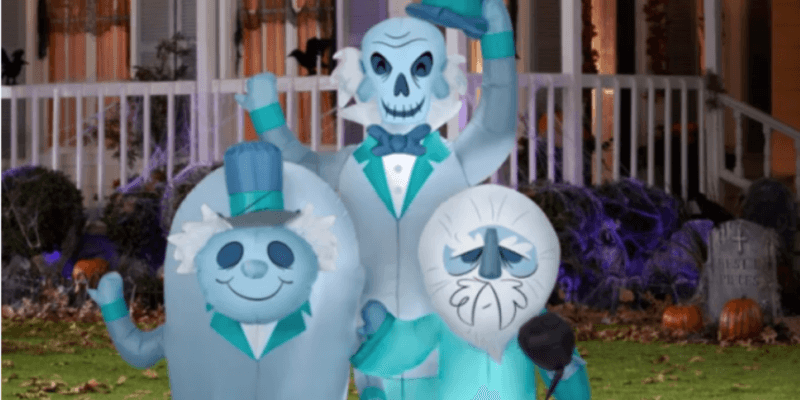 Haunted Mansion fans, the time is almost here. October is right around the corner, and fans of Fall are getting ready for this year’s festivities. Two new Disney inflatables by Gemmy are coming soon for the Halloween season: the Hitchhiking Ghosts from the Haunted Mansion attraction and a Pumpkin Mickey!

Fellow Haunted Mansion fans are in for a treat. Gemmy is releasing a brand new inflatable featuring Ezra, Phineas, and Gus!

Related: Guests Get Stuck On Haunted Mansion, Sees Ride With Lights On

If you go to the official websites for Target and Seasons Inflatables, you can register your email to be notified when these delightful Hitchhiking Ghost inflatables are officially released.

Unfortunately, most websites are stating that they’re “Out of Stock.” Not to fear, the inflatables haven’t been released yet!

You can purchase the Hitchhiking Ghost inflatables through Seasons Inflatables here.

Related: Fan-Favorite Characters Are BACK to Greet Disney Guests This Halloween!

This isn’t the first time Gemmy has created a Mickey inflatable, but they knocked it out of the theme park this time.

Decorate your yard with this adorable Airblown® inflatable character. The Mickey Mouse Cutie is the perfect addition to any Halloween scene. It comes with everything needed for easy outdoor setup. Just plug it in, stake it down and watch the magic unfold. Display this Halloween decoration as a standalone or combine it with other Airblown® Inflatables to create a custom scene.

This inflatable has not been released yet either, but sign up to Seasons Inflatables email list to know when they’re in stock!

You can purchase this spooky Gemmy inflatable through Seasons Inflatables here.

Will you be adding these Disney inflatables to your collection? Let us know in the comments below!