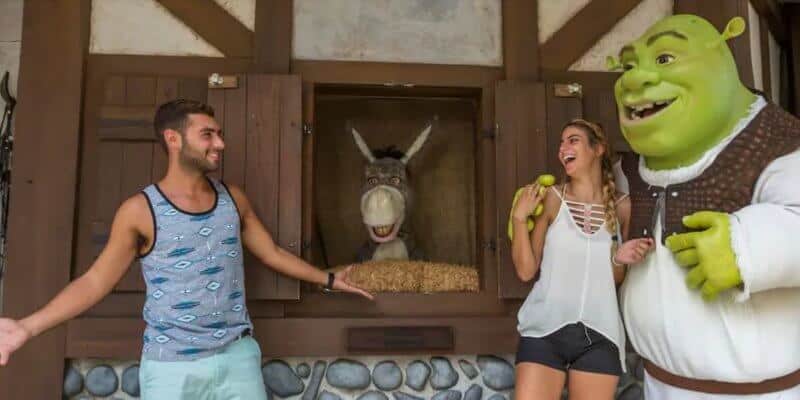 Universal Studios Florida is home to an awesome interactive meet and greet with Donkey from Shrek. Guests who want to meet the wisecracking Donkey and snap a picture with him, Shrek, and Fiona are welcome to do so!

One meet and greet with Donkey was shared on social media and showed Donkey roasting Disney over their treatment of Cast Members during the pandemic versus how Universal Team Members were treated. It is all in good fun, and you have to watch the video!

As you likely know, during the pandemic both Disney and Universal were forced to shut the doors to their theme parks for an unprecedented amount of time. During that time period, both theme parks furloughed a significant amount of their workforce.

Both Disney and Universal have thankfully been able to bring back much of their Cast Members/ Team Members, however, there are still many on furlough.

It appears that Donkey had plenty to say about how Disney handled this situation! In a video posted on Twitter  by user @john_hess you can see the hilarious interaction:

LMAO Donkey has no chill

Here is how Universal describes this meet & greet:

Of course, Donkey, Shrek, and Fiona are not the only characters you can meet at Universal Studios Florida. If you are a fan of the Transformers films Universal offers another interactive meet and greet featuring Optimus Prime, Bumblebee, and Megatron!

What is the funniest thing Donkey has said to you when you visited Universal? Let us know in the comments!