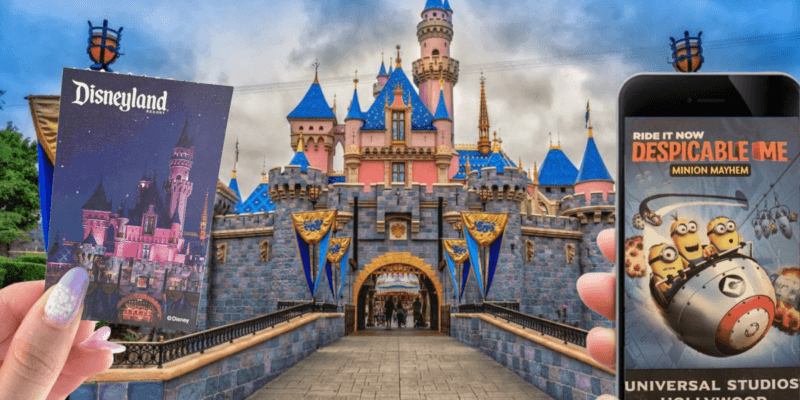 For many theme park fans, the only chance they have to visit Disneyland or Universal is during the summer! This is when the weather is warm, school is out, and, often, schedules can be a bit more flexible. Looking to spend a day or two at the theme parks and want to make sure you’re getting the cheapest ticket possible? We’ve got you covered!

If you are planning on spending a couple of days at the Southern California theme parks, here are the cheapest ticket options available.

Note that even though you could spend a weekend exploring Disneyland, Disney California Adventure, and Universal Studios Hollywood, the least expensive days to visit are actually the middle of the week. If you are flexible in your travel dates, then this article is for you!

Disneyland Resort utilizes a tiered pricing system for theme park tickets. A one-day Park ticket will be considered a Tier 1, Tier 2, Tier 3, Tier 4, or Tier 5, ticket, with Tier 1 being the least expensive (with the least options for days you can visit) and Tier 5 being the most expensive (with no blockout dates). Click here to read our full guide to Disneyland tickets.

The cheapest ticket option for one day at Disneyland or Disney California Adventure this summer is $104. That is a huge savings compared to visiting on a peak day — reopening day, April 30, for example, cost $154 to visit just one theme park…not even to Park Hop!

If you are purchasing a ticket to visit just one Park, it will cost you as low as $104 if you make a reservation for one of the following dates:

A Park Hopper ticket will be an additional $55 charge.

There are other dates in September that also cost as low as $104 for a single Park ticket (without the option to Park Hop). However, those dates all fall during Halloween Time at the Disneyland Resort. The Halloween season at Disneyland and Disney California Adventure officially begins September 3, 2021.

If you want to visit Disneyland and Disney California Adventure for more than one day and you are a California resident, there is currently a great deal going on. Read more about that here.

Universal Studios Hollywood also has a tiered pricing system, with tickets ranging in price from $109-139 for the general public and $99-134 for California residents.

If you want to visit Universal for as low as $114 for a single-day ticket (general pricing) — and $104 if you are a California resident — below are the dates you can choose from:

Universal does offer tickets for the lowest cost later on in the second week of September and beyond, but for the purpose of this article, we are sticking with dates in August and early September.

Unlike Disneyland, Universal Studios does not utilize a theme park reservation system. However, as mentioned, the cost of your ticket varies depending on the date you plan to visit.

Do you plan to visit the theme parks for a couple of days this summer? Are you more of a Disneyland Resort or Universal Studios Hollywood fan? Let us know in the comments!