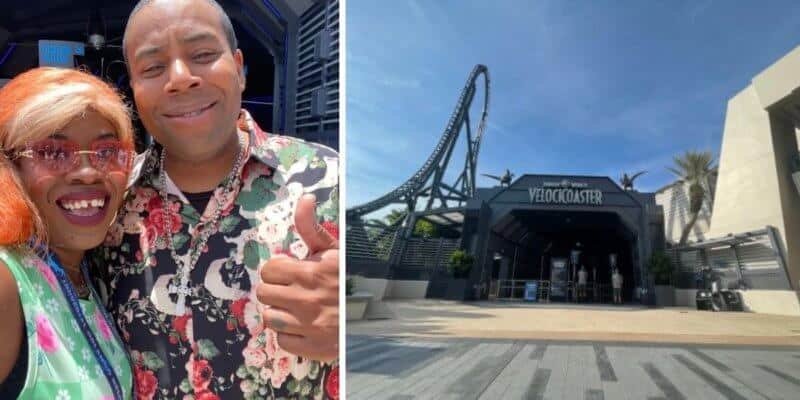 With the Jurassic World VelociCoaster media preview underway at Universal Orlando Resort, many Universal fans have been seeing the coaster plastered all over social media today before its official June 10 opening!

Related: Universal Guests Evacuated Off VelociCoaster After Ride Breaks Down

Although many media outlets may be covering the roller coaster today, one Hollywood celebrity is also at the Park. Today, we saw Saturday Night Live star Kenan Thompson at the VelociCoaster media preview, and he was ecstatic! When we saw Thompson get off the ride, he ended up back in line to ride it for a second time since he enjoyed the attraction so much.

Velocibimbo (@missuniversal91) snapped a photo with Thompson right in front of the attraction’s entrance. Thompson is shooting a thumbs-up in the photo and clearly having a good time riding the coaster:

Although Kenan was not in any of the Jurassic World films, we know that he was in Trolls World Tour, so it is clear that the actor is part of the Universal family!

Personally, I hope that Kenan’s appearance at the VelociCoaster media event means that we could see a skit about the attraction appear on Saturday Night Live in the future. SNL has covered skits about both Disney and Universal theme parks, so it would not be too far-fetched to imagine that a VelociCoaster skit could take place.

For Guests who are looking forward to riding VelociCoaster on their next visit to Universal Orlando Resort, as of June 10, the ride will be officially open! For the past few weeks, the attrition has been undergoing a soft opening, which has meant that the ride was still testing certain elements and did not need to open each day or for the full day.

Now, all Guests will be able to join the hunt alongside Chris Pratt, who plays Owen Grady in the Jurassic World franchise, as they ride through an InGen raptor paddock coaster!

Have you been on VelociCoaster yet? Would you want to ride back to back like Kenan Thompson?