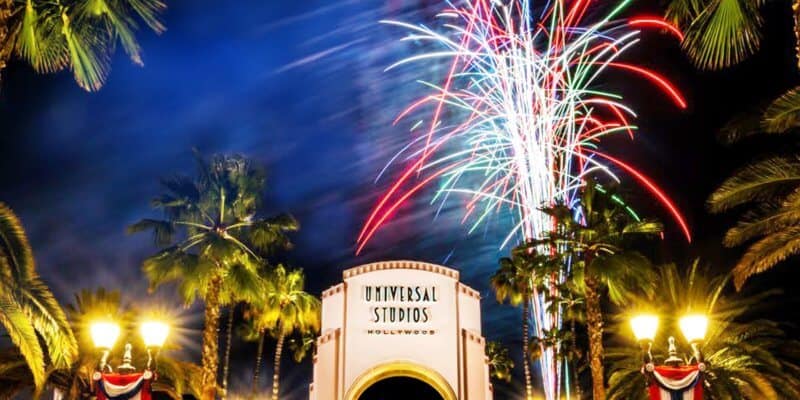 After Guests of Universal Orlando Resort saw Universal Orlando’s Cinematic Celebration return to the theme park, and now that fireworks are back at both Disney World and Disneyland in just a few short days, many did not expect that Universal Hollywood would be the first to announce Fourth of July fireworks.

The exhilarating energy of Independence Day will permeate the theme park as guests enjoy musical performances, along with popular rides and attractions. At 9:00 p.m., the holiday is capped off with the extravagant fireworks display synchronized to a score of Universal-themed music and patriotic favorites.

The festivities will punctuate the skyline as guests stroll along a cleverly themed Pets Place to the front of Katie’s NYC apartment building, home to the innovative “The Secret Life of Pets: Off the Leash!” ride.

Only the deafening roar of the extraordinarily realistic Indominus rex dinosaur, featured in “Jurassic World—The Ride” could possibly drown out the fireworks display.

At the moment, Universal Studios Hollywood is the only theme park when it comes to both Universal and Disney (coast to coast) to announce that they will have special fireworks specifically for the Fourth of July, which is very exciting news.

Typically, Fourth of July fireworks are much bigger than the average fireworks show put on by theme parks such as Disneyland, so it is a great way for Universal Studios Hollywood to celebrate the holiday with fireworks, especially since they do not typically have them on a nightly basis as WaterWorld is the main evening event.

If you want to visit Universal Studios Hollywood on the Fourth of July to see the fireworks spectacular, head to the upper lot at sunset.

Do you think that Disneyland will do anything different for the Fourth of July in terms of fireworks? Let us know in the comments below!

Comments Off on Fourth of July Fireworks Coming to Universal Hollywood