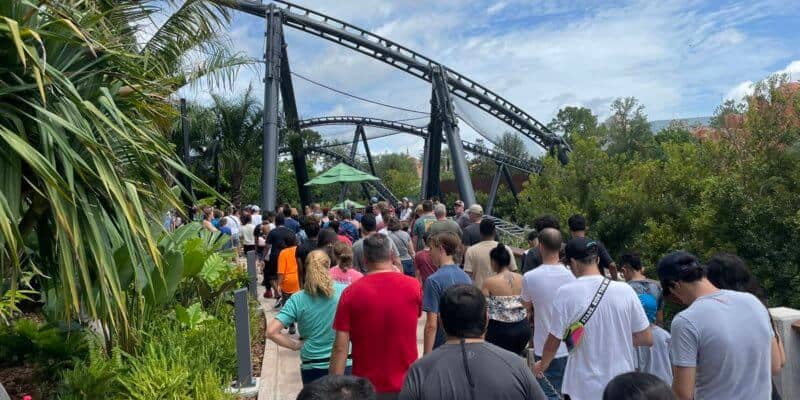 When Guests visit Universal Orlando Resort, typically, attractions can function without a hitch! That being said, there is always a possibility that something could go wrong, whether from an accident or a maintenance issue.

Jurassic World VelociCoaster is the newest Universal attraction to be added to the Islands of Adventure theme park, and Guests cannot stop raving about the attraction. The coaster is arguably the most thrilling coaster that both Islands of Adventure and Universal Studios Florida have to offer. Considering the attraction was in soft-opening for around a month before officially opening, there have not been too many maintenance issues that have heavily affected riders.

Today, however, it seems that a fire alarm went off inside the attraction, which meant all Guests had to be evacuated from the ride, including everyone in the queue.

Reporter Alicia Stella (@AliciaStella) took to Twitter to share a video of all the Guests having to leave the attraction and move to an outdoor queue. As Alicia mentioned, all Guests seemed to be compliant with exiting the attraction to ensure their safety:

Current situation in courtyard. Fire alarm continues to go off. Guests being held out here until building is deemed safe again. Everyone is being patient and Team Members are keeping order.

Guests being moved through extended queue to courtyard at this time. Many guests have items inside lockers in queue, being told to wait outside until further notice.

Current situation in courtyard. Fire alarm continues to go off. Guests being held out here until building is deemed safe again. Everyone is being patient and Team Members are keeping order. pic.twitter.com/5dt6mYB8GF

Orlando Amusement (@OrlandoAmusement) also shared that the fire alarm went off on the attraction:

Orlando Amusement continued to share updates on the situation as time has gone on. It seems that the fire alarm has been deactivated, which is great news as this likely means that there is no serious on the attraction. The Twitter account also noted that the ride would reopen soon:

Fire alarm has been deactivated, ride will reopen soon.

Fire alarm has been deactivated, ride will reopen soon.

Considering this is the first time Universal has had to fully evacuate the entire ride and queue as a whole on an already busy theme park day, it seems that things went flawlessly. No Guest has been reported as injured as of yet, and Team Members could execute the evacuation without causing Guest unrest, which is always a possibility when you tell a Guest they must leave a line they were waiting in for quite some time.

If you plan to ride the coaster today, stay tuned to the Universal Orlando app to see when VelociCoaster roars back to life!

What would you do if you were at an attraction and the fire alarm went off? Let us know in the comments below!