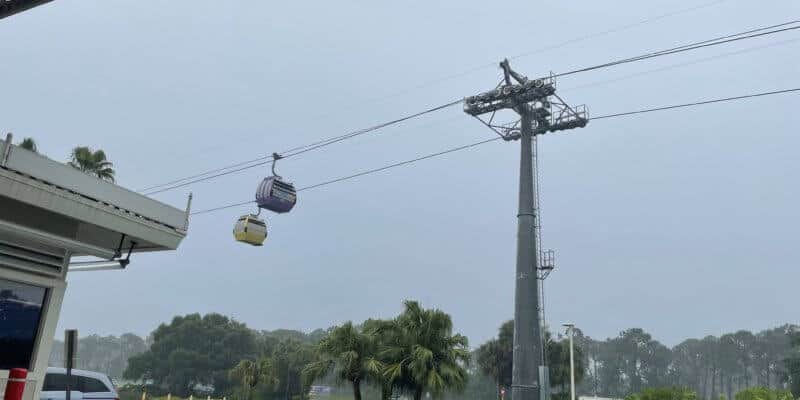 The Disney World Skyliner appears to be undergoing some interruptions in transit due to some poor weather in the Orlando area. As of 6:45 p.m., the line was not moving and the Skyliner vehicles were stuck in place as a thunderstorm is currently going through the area.

Inside the Magic’s, Alessa D. was in the area at the time and shared the following photos of the Skyliner gondolas stuck in place. Alessa also reported that the gondolas were swaying in the wind due to the stormy weather.

Thunder and lightning striking in the area are also being reported at this time. It is hurricane season and the humidity is typically very high right now in the Sunshine State, so thunderstorms are a frequent occurrence.

For Guests who still need to get to and from the theme parks and Disney Springs, Walt Disney World offers other forms of transportation including busses for each resort, and the monorail — which runs to the Ticket and Transportation Center, Disney’s Contemporary Resort, Disney’s Grand Floridian Resort & Spa, and Disney’s Polynesian Resort.

There were reportedly no Guests on the Skyliner when it was forced to stop operations. When Disney learns a storm is coming through, they evacuate all Guests off of the Skyliner, so it can stop before the storm hits.  Whenever a stall such as this occurs, Disney ensures that Guests are aware of the situation and works to get them on their way as soon as possible.

It is not uncommon for Disney’s Skyliner to stall operations during stormy weather. Disney does not like to operate the gondolas during inclement weather, especially if there is lightning, which was reported in the area. Disney has safety procedures in place for this kind of incident in order to keep everyone safe and evacuate them if needed.

Have you been in a Skyliner gondola during a storm at Disney World? Let us know in the comments!

Comments Off on Disney Skyliner Stuck Due to Stormy Weather