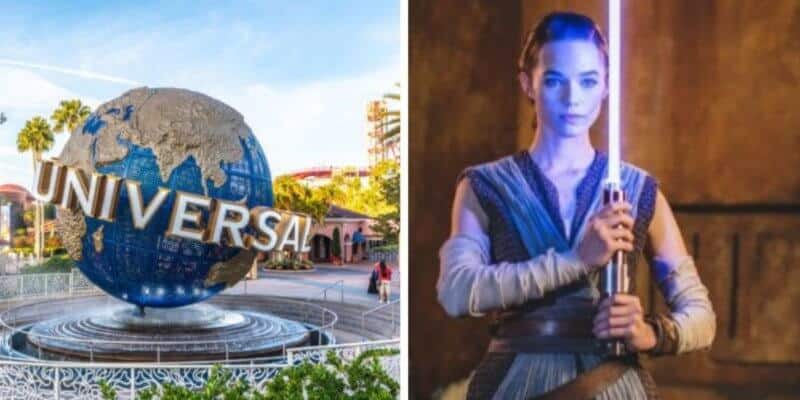 Today, May 4, is universally known as Star Wars day worldwide. The saying “May the fourth be with you”, is just too perfect to ignore, ere go, Star Wars fans collectively ban together to celebrate each year!

Because the George Lucas franchise is a Disney IP, we typically see Disney celebrate the day quite heavily. Already, we have seen plenty of detail about the new Star Wars: Galactic Starcruiser hotel that is set to open in 2022, as well as plenty of merchandise now available on ShopDisney!

That being said, Universal Orlando Resort seemed to want in on the fun! But how could Universal join in on a holiday that stems from a Disney IP?

Well, Universal has recently also been a popular theme park to discuss as many Annual Passholders have had the chance, and continue to have the chance to ride Jurassic World VelociCoaster before it debuts permanently at Islands of Adventure on June 10.

The attraction has plenty of G-force moments where riders levitate, and it seems that Universal used that aspect of the coaster to relate to the holiday at the Twitter account (@UniversalORL) said:

May the G-Force Be With You.

May the G-Force Be With You. pic.twitter.com/rMsR78bpA5

Universal has been known to use its Twitter account to troll Disney time and time again. The playful banter that the Twitter account holds with its competition is very fun and entertaining to see, and usually leaves readers with a small giggle.

Recently, it seemed that Disney may have responded to all the pokes they have received from Universal over the years by replicating a classic scene from Jurassic Park River Adventure where the two dinosaurs are fighting over a shirt, by having two monkeys fight over underwear in the Jungle Cruise concept art. It was not said that this was the intention, however, the similarity is definitely there.

Of course, VelociCoaster has nothing to do with Star Wars, which may be what makes the Tweet even more hilarious!

Universal has continued to joke around on Twitter today adding to their May 4 repertoire:

If you only knew the value of the Dockside…

If you only knew the value of the Dockside…

This website is a pathway to many deals, some considered to be unrivaled.

This website is a pathway to many deals, some considered to be unrivaled. https://t.co/hDNQK2X4At

If you want our full review on the latest thrill coaster, click here to take a read!

How are you planning on celebrating Star Wars day? Will you be heading to Batuu or experiencing the force, G-force style?

If you want to visit Universal Studios, Universal’s Islands of Adventure, Volcano Bay, or CityWalk — you need a Universal parks vacation! From Halloween Horror Nights to Mardi Gras there is always something fun to do at Universal Florida. A trip to Central Florida mixed with some Universal Studios Florida will definitely get you in the theme park spirit. Click here to get started today.