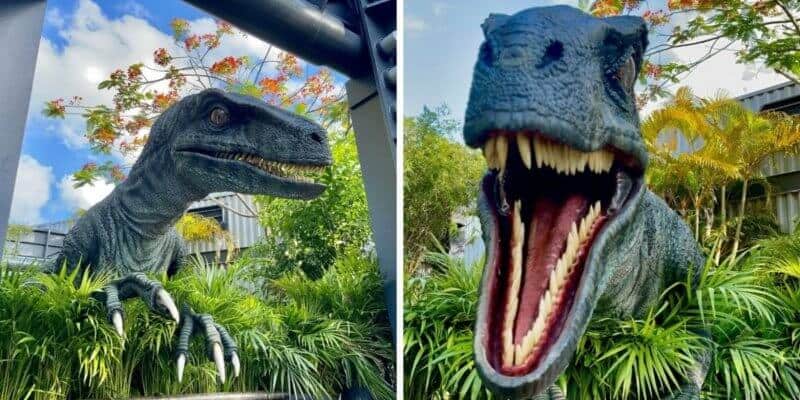 Universal has truly stepped up their game when it comes to the Jurassic Park section of Island’s of Adventure, and now, it seems that a new dino is being added to the pack.

At Universal Orlando Resort, Islands of Adventure has just released their latest coaster, Jurassic World VelociCoaster, which will officially debut on June 10. With that has also come added dinosaur photo-ops to the Jurassic Park-land leaving Guests surrounded by dinosaurs.

Plus, for all the dinosaur lovers out there, it is exciting to note that you can actually meet a dinosaur when visiting the theme park! That’s right, across from the raptor paddock at VelociCoaster is the Raptor Encounter, a meet and greets with one of the raptors from the film.

If you have ever done this photo op, you know that the Team Members do a fantastic job getting Guests worried that they are about to have their heads chopped off, and oftentimes, the raptor will swing forward and chomp, leaving Guests screaming and running away.

Now, there is a new raptor being added to the experience, and it seems that Guests can now also get attacked by Bravo!

Everyone welcome Bravo, the newest Raptor addition to our pack!

Everyone welcome Bravo, the newest Raptor addition to our pack! ? pic.twitter.com/rLjTRdMm01

Although Bravo is not as well known as Blue, with Jurassic World: Dominion coming out in 2022, perhaps this is a way to introduce a new dino to the film’s audience before we can see the movie! That is purely speculation, but it would make sense.

The raptors in the Jurassic World film are named, Blue, Charlie, Echo, and Delta — Those are the same raptors we see on the VelociCoaster.

If you are planning on heading into the Raptor Encounter at Universal, my piece of advice is not to wear animal print. The raptors may think you are a little tastier and chomp at you extra hard if you do!

What do you think of the new raptor, Bravo, being added to the Raptor Encounter experience?

If you are a fan of dinosaurs, Jurassic Park, or Jurassic World, you need to get to Universal Orlando Resort! Enjoy the terrifying views of the prehistoric creatures, meet them, run with them, get splashed by them, and even visit InGen! Click here to begin booking today.