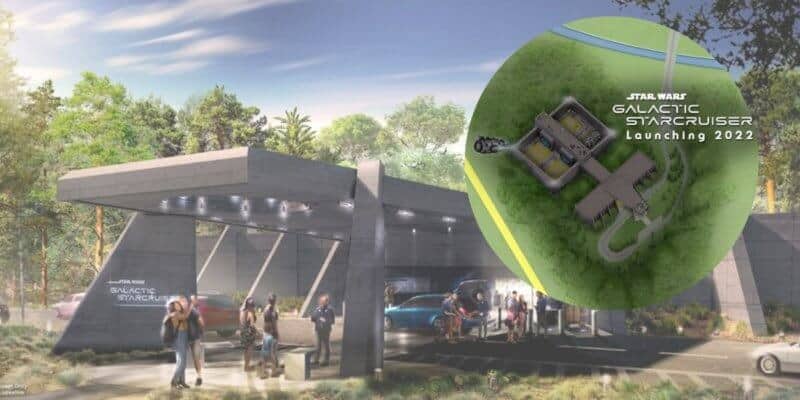 Star Wars: Galactic Starcruiser is an upcoming immersive, two-night vacation experience at Walt Disney World Resort. The soon-to-be Star Wars hotel will take Guests to a galaxy far, far away and is sure to be a once-in-a-lifetime experience.

Just this morning, it was revealed that the Star Wars: Galactic Starcruiser would be coming to Walt Disney World sometime in 2022. Now, Disney is continuing to get Guests excited for the Starcruiser’s launch as it is now showing on the digital maps via the My Disney Experience app and on the official maps on the Disney World website.

As you can see in both the screenshots above and below, the digital map on My Disney Experience is now showing the Galactic Starcruiser along with its official launch year of 2022.

We already knew that the hotel would be right in the backyard of Batuu (Star Wars: Galaxy’s Edge at Disney’s Hollywood Studios), but now we can see just how far away it really is.

Additionally, thanks to the newly updated map, we can see just how big the Starcruiser is, too, and we can notice how much real estate it takes up on Disney property.

What we are seeing on this map is the “terminal” that will act as the transportation port to immerse Guests in the story. In the story, Guests will enter the port and then be “transported” to the Halcyon, the official name of the Starcruiser. Knowing that this is a highly immersive experience that will give Guests the feeling that they are actually heading to a galaxy far, far away, it’s no surprise that, from the looks of this map, it looks relatively large compared to Batuu! But compared to other, larger hotels, it looks pretty small.

In case you aren’t familiar, Guests will be able to dine at the Crown of Corellia Dining Room, operate the ship’s navigation and defense systems under the crew’s guidance at The Bridge, experience the traditional art of wielding a lightsaber and put those skills to the test, sip a drink in The Sublight Lounge, and more!

When Star Wars: Galactic Starcruiser officially debuts to Guests next year, they will be fully immersed into a galaxy far, far away for an out-of-this-world vacation experience. Disney officials have already been giving sneak peeks, including what the nearly completed staterooms onboard the luxury starship will look like, which you can read more about here.

As mentioned earlier, the first-of-its-kind hotel will be right in Batuu’s backyard, making it an extension of Star Wars: Galaxy’s Edge at Disney’s Hollywood Studios. Guests who choose to book a passage on the Halcyon starship — the name of the starship that passengers will board when they enter the Galactic Starcruiser — will get to experience a port excursion on the Outer Rim planet of Batuu.

Do you plan on staying at the Star Wars: Galactic Starcruiser when it launches? Are you excited to experience this? Let us know in the comments below.

Comments Off on Disney Adds ‘Star Wars’ Hotel to Digital Map — It’s Out of This World!