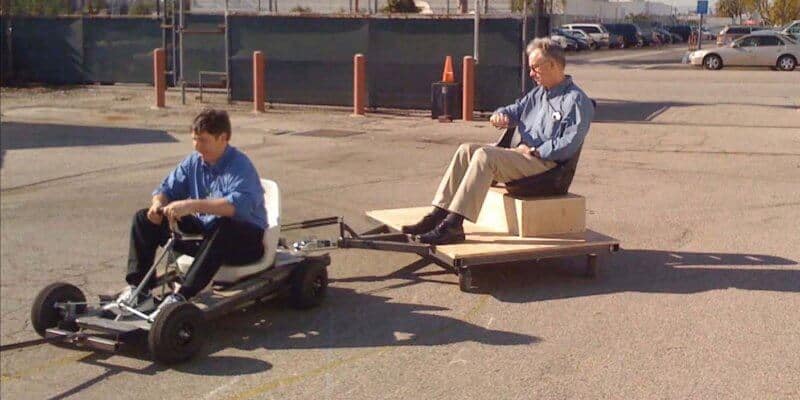 Former Disney Imagineer Jim Shull shared a behind-the-scenes look at the development of one popular attraction that would go on to be featured in three Disney theme parks around the world!

Jim Shull is a former Disney Imagineer who is very active on social media. His Twitter is full of great behind-the-scenes looks at attractions and other projects from Disney theme parks and resorts around the globe that he worked on.

Today, Shull took to his Twitter to share a photo of the development of Mater’s Junkyard Jamboree attraction that is found in Cars Land at Disney California Adventure. Although the attraction looks a bit different than the concept art (as Disney California Adventure fans know, mater can be found in other locations throughout the land rather than just at Mater’s Junkyard Jamboree), it is still amazing to see a peek at the development of an attraction that inspired others around the world.

You can see Shull being towed by a mock ride system as he times out the attraction!

In these previously public released images is my concept art for Mater’s Junkyard Jamboree at DCA. Also me being towed in a mock up and ride timing study. Creating rides is a mix of fun and steady research to deliver projects. #Pixar #DisneyCaliforniaAdventure

In these previously public released images is my concept art for Mater's Junkyard Jamboree at DCA. Also me being towed in a mock up and ride timing study. Creating rides is a mix of fun and steady research to deliver projects. #Pixar #DisneyCaliforniaAdventure pic.twitter.com/etewinWA2C

These photos are great as they really give fans a look at how much work goes into creating attractions for Disney theme parks from the ground up. It is not always glamorous, but it always looks like fun!

Mater’s Junkyard Jamboree turned out to be such a fun attraction and was so loved by Guests of all ages that Disney decided to add it to three other theme parks around the world. You can find the same attraction with a different theme at Walt Disney World, Tokyo Disneyland, and Shanghai Disneyland!

Additionally, at Shanghai Disneyland, you will find a Toy Story version of the attraction called Woody’s Roundup.

I wonder if Shull realized the Mater’s attraction would result in multiple different attractions around the world? As a Disney fan, these little bits of behind-the-scenes are always such a fun treat!

Have you experienced any of these attractions? Which is your favorite? Let us know in the comments below!

Want to book a Disney vacation? We can help — click here for more information.