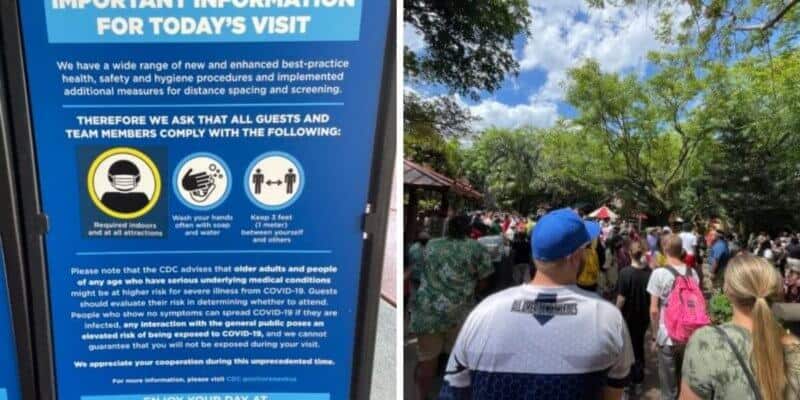 If you did not know, both Universal and Disney World have relaxed their mask rules for Guests, allowing them to remove masks while walking outdoors.

Inside the Magic was able to see just how busy both Universal Studios Florida and Universal’s Islands of Adventure were on the first day that the new relaxed protocols came into place.

On May 14, Universal announced the change that when Guests are not indoors or in line for an attraction, they could remove their masks. This change follows Universal’s decision to rid temperature checks and reduce to 3 ft physical distancing, as recommended by Orange County, Florida.

That being said, it seems that the new change had many Guests wanting to visit Universal Orlando Resort, as the theme parks were quite crowded!

Below, you can see that the Jurassic Park section of Islands of Adventure was full of Guests. Some with masks, some without.

The Wizarding World of Harry Potter was also quite full, as seen below.

CityWalk, the entrance and exit to Universal Orlando Resort, was also flooded with Guests. As you can see in the below photo, we were not the only ones taking photos of the massive crowds, as other Guests also took their phones out to capture the moment.

Universal did have signage throughout the park and audio reminders that expressed the new face-covering rules to Guests. As you can see below, the old signage which said that Guests must always wear a mask has been replaced by a sticker which showcases the new rules that masks are only required indoors and at all attractions.

At the moment, Universal has not noted that their capacity has increased from the previously mentioned 35%. That being said, Universal has silently increased capacity in the past. As an Annual Passholder who goes to the theme parks weekly, I can say that crowds definitely seem a lot larger than previously, and that is without the parks hitting capacity, as they used to do very often. However, please note that any hint of a capacity increase is just speculation at this point, as Universal has not announced any official changes.

It should be noted that Governor DeSantis has allowed all businesses in Florida to reopen fully. Therefore, it is up to Universal Orlando Resort to decide how high they would like to set their capacity limits, if any.

Now that masks are no longer required at Universal Orlando Resort while outdoors, even with all the new signage and audio reminders, it still seemed that around half the Guests continue to wear masks, while the other half do not. It will be interesting to see if this trend keeps up or if more Guests begin to remove their masks while outdoors.

What do you think of the new mask rules at Universal Orlando Resort? Let us know in the comments below!