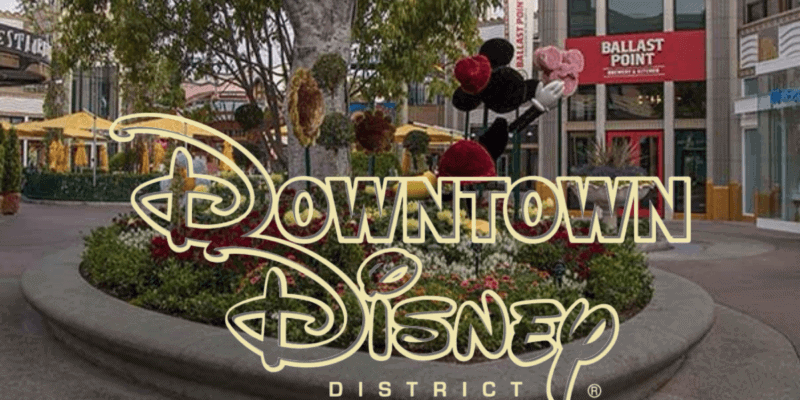 The Downtown Disney District has gone through one major change since originally being closed due to the pandemic. Last summer when the area prepared for its reopening, there were noticeably more sanitizing stations and different queue methods.

Even through the holidays, the district did have some festive decorations, but, there seemed to be something missing.

The planters throughout Downtown Disney received updates, but not of the decorative kind. Markers were put in place to enforce safe and social distancing, making some seating not available. However, other than this update in seating, the planters in Downtown Disney have been a bit lacking, until now!

The Downtown Disney topiaries are back! Well, almost. One installation of the topiaries has appeared today. And we are extremely hopeful that there are more to come!

The newest spring topiary features Chip and Dale with a beautiful set of colorful flowers that are perfect for spring. Thanks to paulsthemeparkadventures on Instagram, we have a first look at this new Downtown Disney display.

In the past, the folks at the Disneyland Resort have gotten really creative with their topiaries, especially in most recent years. Just ahead of the resort’s 2018 Pixar Fest, Downtown Disney had some fun Pixar topiary displays. These displays featured many Pixar character favorites. There were characters from Finding Nemo, Toy Story, and The Incredibles.

Related: You Can Win Dinner at Downtown Disney! Here’s How

It’s great to see these beautiful masterpieces and the Cast Members that create these come back to the Disneyland Resort!

What do you think of the new Downtown Disney topiaries? Would you like to see more of them? Let us know in the comments!

Planning a trip to the Disneyland Resort to see these  beauties at the Downtown Disney District? Let Academy Travel help you with all of your vacation planning!