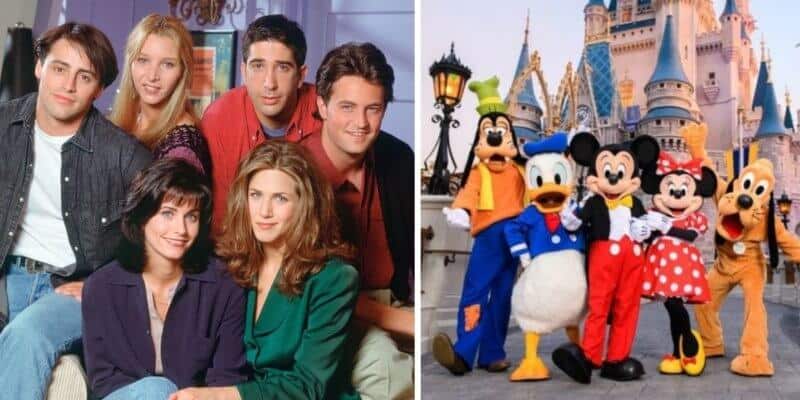 Arguably, one of the most popular sitcoms ever made was Friends. The show, which began in 1994, ran for over 10 seasons as audiences fell in love with Rachel, Ross, Monica, Pheobe, Chandler, and Joey while watching the characters grow up through their mid-20’s/early 30’s.

Now that the reunion episode has debuted on HBO Max, fans of the show are discovering things they never knew, including the fact that there was supposed to be a Disney World-set episode, but Disney turned it down due to it being too “risqué.”

Sitcoms from the ’90’s almost always had a Disney World episode — from Boy Meets World to Rosanne to Full House, everyone wanted to take a Disney World vacation. Even now, shows like American Idol still film at Disney Parks! With that being said, it was odd that Friends never took a trip to visit the Mouse.

Kevin S. Bright, one of the original executive producers on Friends, discussed how there was supposed to be a Joey-centric episode that would involve him going to Disney World:

“We were very close to doing Friends in Disney World,” Bright said. “Originally Disney World approached us. [Former Walt Disney Company Chairman and CEO] Michael Eisner called me and said, ‘We’d really like to do a shoot on location in the park.'”

Bright acknowledged that the show felt “kind of risqué for Disney stuff,” but he was assured it wouldn’t be a problem and to “do whatever you want.” Well, the concept the producers and writers came up with didn’t end up flying with the Mouse House.

Lucky for all of us Friends and Disney fans, although the story never came to fruition, Bright detailed what the episode would have been about, and it is pretty hilarious:

“Joey [Matt LeBlanc’s character] gets a summer job as a giant… he’s basically a giant lightbulb in the electrical parade. The cast goes down there to see him. And before they get there, Joey has a date with the girl in the Disney parade that plays Cinderella. They go back to his place, they have sex, and she realizes it’s midnight. She’s got to get that costume back or they’re gonna dock pay from her. So, she’s in a hurry, she gathers up her clothing, Joey doesn’t even know her name.”

And, of course, Cinderella would need her glass slipper, but in this case, it would have just been a bra left behind to remind Joey of the night he spent with a Disney Princess. As you may imagine, Disney turned down the idea after hearing the pitch. Interestingly enough, this storyline does sound similar to another we have seen in the past.

In Season 5, Episode 23/24, “The One in Vegas,” Joey gets a job as an atmosphere performer in Caesars Palace, and the gang goes down to visit him. Although Joey never finds his Cinderella, the idea of him getting hired as a performer in another state is quite similar to the Disney storyline. However, although we do not have it confirmed, it’s fun to imagine that the rejected Disney World idea could have been recycled into something else!

If you want to check out the reunion and see Matt LeBlanc, Jennifer Anniston, Courteney Cox, Lisa Kudrow, Matthew Perry, and David Schwimmer all back together again, you can take a look on HBO Max!

Do you wish that Friends had a Disney World episode? What do you think of the plot Friends came up with for the episode?