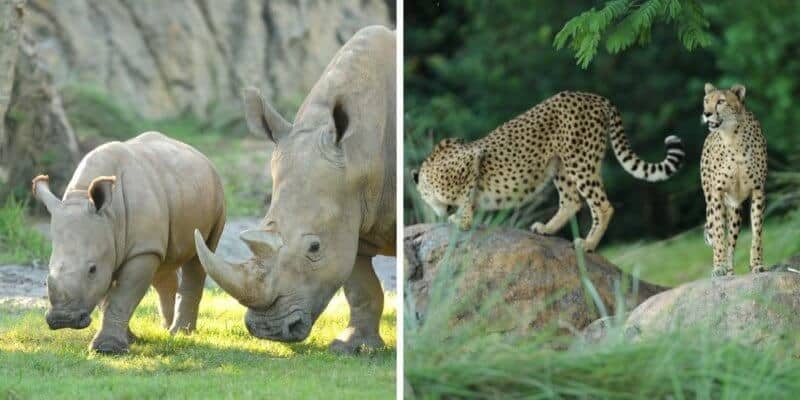 Kilimanjaro Safaris is a popular attraction at Disney’s Animal Kingdom theme park at Walt Disney World. Guests love hopping aboard the safari vehicle as they begin their adventure through the safaris at the Disney theme park — spotting several different animals including flamingos, lions, giraffes, rhinos, and more!

One of the best parts about this theme park attraction is the fact that it is different every single time you ride it. You never know what the animals will be up to! Sometimes you will see the giraffes up close and personal while other times you may hear the lions roar.

Well, just recently, one Disney Guest aboard Kilimanjaro Safaris witnessed two different animals interacting with one another. A baby ranger was full of excitement as he ran around the safari grounds — But not only did this baby ranger catch the eyes of the Guests on the ride, but also those of the cheetahs!

If you take a look in the background of the video, as the baby range runs past the safari truck, the Guest taking the video zooms in and you can see the cheetahs paying attention to the little ball of energy, too!

Check out the video Reddit user Traviscaat posted along with the caption:

Baby Ranger came out to play today!!! And caught the cheetah’s attention.

Baby Ranger came out to play today!!! And caught the cheetah’s attention. from WaltDisneyWorld

We do want to note that there is a moat separating the rhinos from the cheetahs so both species are safe. One Reddit user, kawherp, commented on the video saying:

Some animals share the space. If you look closely, you can see the cheetahs are separated from the rhino area with a moat. Disney does indeed do a great job of creating barriers that do not scream “I’m a fence” while keeping dangerous predators away from prey.

Have you ever had a once-in-a-lifetime experience on Kilimanjaro Safaris? Let us know in the comments below.

Do you want to visit Disney World on your next vacation and hop aboard Kilimanjaro Safaris? Start planning today!