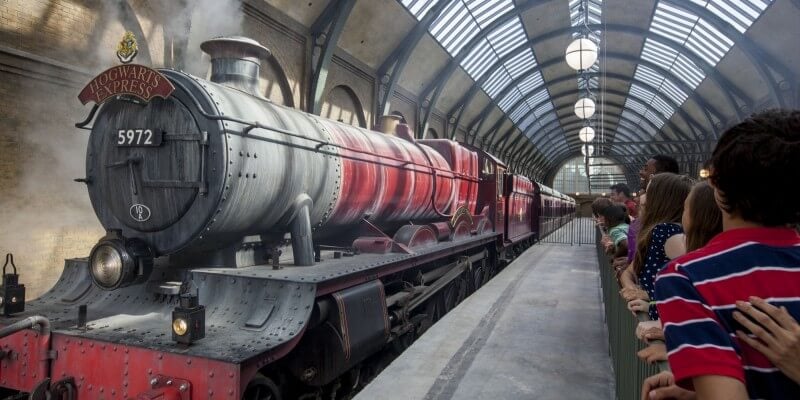 As Guests re-enter theme parks during the pandemic, they will begin to discover that there are many changes. When visiting Universal Orlando Resort, Guests are required to wear masks unless actively eating or drinking — and that means while on attractions.

Previously, we reported that Universal was always watching Guests on attractions for safety reasons, as well as to catch anyone from removing masks with active signage and reminders. This is something that happens at Disney World as well, and personally, I have been on attractions at both theme parks where Cast Members and Team Members have stopped a ride to remove a maskless Guest or to remind them to put their mask back on.

Now, it seems that at Universal, some attractions have even increased those surveillance warnings. Reporter Alicia Stella (@AliciaStella) was riding the Hogwarts Express and noted:

Three warnings about active surveillance on Hogwarts Express, including being shown a photograph of the camera’s angle, prerecorded spiel and TM warnings.

Is this all for making sure guests keep masks on, or will it continue after safety precautions lifted, for *other* reasons?

Three warnings about active surveillance on Hogwarts Express, including being shown a photograph of the camera’s angle, prerecorded spiel and TM warnings.

Is this all for making sure guests keep masks on, or will it continue after safety precautions lifted, for *other* reasons? pic.twitter.com/zR2Pwwk61c

It is important to note that Alicia has specifically noted that the warnings, reminders, and signage, are all about active surveillance, not specifically about Guests keeping their masks on.

Of course, Universal does its best to ensure that all Guests are always properly masked, but on this attraction specifically, it seems that the warning may last longer than the pandemic due to safety reasons.

These warnings have been happening for a while as back in January another Twitter user @InTheLoopLegend shared their experience being told about the surveillance on the attraction:

Man, there must have been some freaky stuff going down on the Hogwarts Express at Universal with it being one party per cabin. You are now warned twice that you are under active surveillance & are shown a picture of what the security camera sees

Man, there must have been some freaky stuff going down on the Hogwarts Express at Universal with it being one party per cabin. You are now warned twice that you are under active surveillance & are shown a picture of what the security camera sees

The Hogwarts Express is a part of the Wizarding World of Harry Potter, and while it is a fun attraction for fans of the Harry Potter franchise, it also moves Guests between Universal Studios Florida and Universal’s Islands of Adventure.

Due to pandemic-era protocols, every party gets their own cabin when riding this attraction, and the cameras are the only way that Team Members can keep an eye on riders while the attraction is in motion unless they open the cabin door which interrupts the experience.

Because of this, it is understandable as to why the cabins all are equipped with cameras, as Universal must ensure that Guests are behaving properly, and remaining safe during the ride — especially when they cannot see them. The attraction has a tiny camera that looks like a small dot on the ceiling.

Interestingly enough, it seems that the enclosed cabins make it very well-known that Guests are being watched, however, there are cameras on every attraction, as well as around the park always surveilling Guests. But considering that many may tend to forget that fact, since the cameras are not out in the open, Universal must be diligent in ensuring that even when it seems that you are “alone” on an attraction, you are still being watched and should behave accordingly.

We spoke with Universal and asked if the audio, verbal, and sign reminders were for COVID-19 and mask wear, or if it is something that will last as time goes on. It seems that the camera is around for more than just catching unmasked Guests, as mask wear was never mentioned.

Of course, the requirement for Guests to wear face masks coincides in with safety, but, it seems that Universal is being broader with its reasoning for surveillance on the Hogwarts Express. Therefore, it is likely that these reminders may be around in the future.

Did you know that Hogwarts Express had you under surveillance?

If you want to plan a Universal vacation, you can get started today! From events such as Halloween Horror Nights, to Mardi gras, to just enjoying their Volcano Bay water park and CityWalk, there is so much to see and do! Universal Studios and Universal’s Islands of Adventure is fun for all ages. Jurassic World VelociCoaster will also be available shortly in the Jurassic Park section of IOA, which is a huge reason to visit!