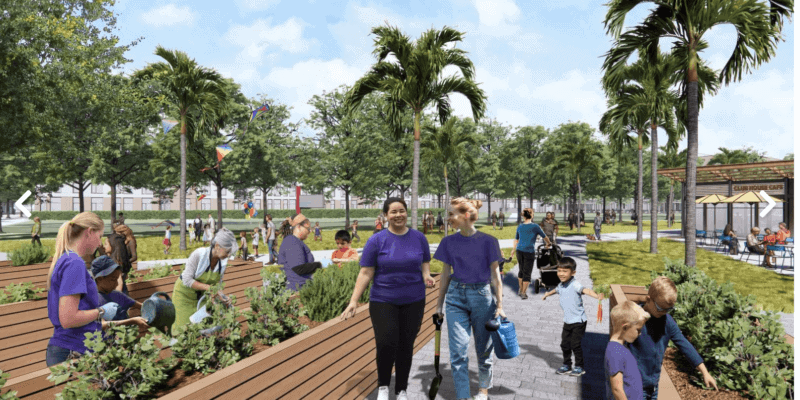 If you love Disney World and Universal Orlando Resort, there is a good chance that when you have visited the area on vacation, you have said, “I wish I could live here”.

Well, for those who do live in Orlando, it is no secret that the cost of living is often quite high.

Although Orlando, FL is not one of the most expensive places in the nation to live, Orange County Mayor Jerry Demings noted that 110,000 households are still “chronically stressed”, so this is a fantastic solution to that problem.

This is why Universal’s latest non-profit project, “Housing for Tomorrow“, is such a fantastic solution to the problem. As we previously reported, Universal donated land to and is actively involving themselves in a new affordable housing community.

Now, ClickOrlando confirmed that a developer has been selected for the community which is set to break ground in 2022. The site, which will have 1,000 apartments, 16,000 square feet of retail space, and be located right by Universal’s next theme park, Epic Universe, will be built by Wendover Housing Partners, based in Altamonte Springs.

The article continued to say,

“This is a first-ever approach that brings a theme park entertainment company and its pledge of land and creative resources together with an experienced affordable housing developer to find a unique solution to one of Central Florida’s most pressing issues.”

“Affordable Housing is one of our community’s biggest challenges and we want to be part of the solution. We have brought people with the right expertise together with land to create a new affordable housing community – and a new approach to this issue.”

Considering how Disney World also just created affordable housing for Cast Members and others in the Orlando area, it is great to see how Universal is doing the same while ensuring that everything is of the best quality. Disney is also rumored to be building another new community in Florida, though, unlike this Universal Project, that project has not yet been officially confirmed.

Universal’s new housing, shopping, and eatery complex may serve as sort of ultra-affordable and desirable housing location for the theme park across town, and allow Team Members to live close to work if they desire, at a much less expensive price point.

To watch the full video, take a look below!

As we previously discussed, below is the official statement from Universal’s Housing for Tomorrow:

We believe access to affordable housing is a human right. We strongly support the findings and recommendations of Orange County’s Housing for All Task Force. We will play an active, leadership role in helping our community move solutions forward.

At the moment, we are not sure when the complex will be ready, but we do know that construction will begin in the second half of 2022.

Would you be interested in living in this new Universal housing complex?