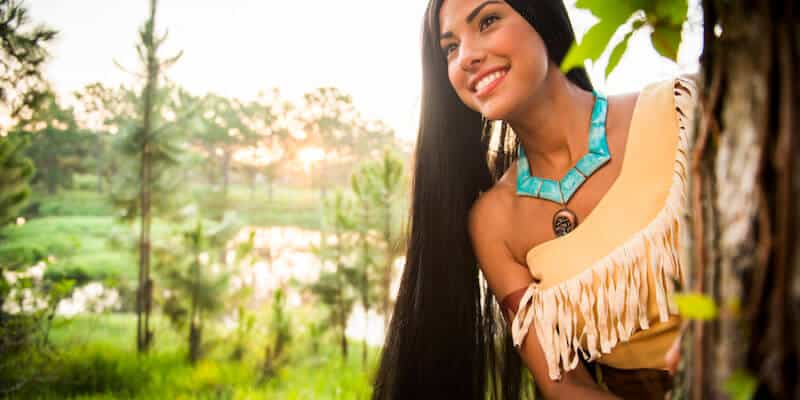 Disney Parks are known for incredible Disney character encounters and meet and greets. Many parents cannot wait with a camera in hand to see their child’s first look when Mickey makes an appearance. There are some characters that may be “exclusive” or “rare” to meet and sometimes can surprise fellow Disney addicts like me. Today we say “Wingapo” to a fellow adventurous princess whose meet and greet has returned to one Disney Park.

Pocahontas in the Castle of Magical Dreams

Hong Kong Disneyland is one of the Disney Parks that is currently operating, and character encounters have slowly been returning to this Disney Park. As of now, Guests can encounter over 10 Disney Princesses at the Royal Reception Hall in Fantasyland in Hong Kong Disneyland. Check the official website for more information.

Last year, Sleeping Beauty Castle in Hong Kong Disneyland was transformed into the dazzling Castle of Magical Dreams. According to Disney Magical Kingdom Blog (@DMK_Blog on Twitter),  one of our beloved and free-spirited Disney Princesses is now meeting Guests at the castle!

#Pocahontas met the guests again inside “Castle of Magical Dreams”!

Pocahontas in Tokyo and Shanghai

Unfortunately, many meet and greets have been suspended in Walt Disney World due to the ongoing pandemic. Keep in mind that although meeting Pocahontas on Discovery Island Trails is temporarily unavailable, there have been some sightings of our Native American Princess alongside her friend Meeko on a float in Disney’s Animal Kingdom. So, while you cannot currently see Pocahontas up close at Disney World, you can wave to her from afar at one of the four Florida Disney Parks.

Disneyland Resort has not officially announced the current schedules of meet and greets as Disneyland prepares its grand reopening on April 30 and traditional character meet and greets have been suspended. Disneyland did announce, however, that characters will be delighting Guests in new ways, and although Pocahontas was not mentioned as one of the characters coming back to Disneyland when the parks reopen, we know that many fans hope to see her waving to them from afar in the near future.

It is good to note that in the past, Pocahontas was occasionally seen walking around and waving to Guests near the Hungry Bear Restaurant in Critter Country and the Rivers of America at Disneyland Park.

Which rare Disney character are you excited to meet in the future? Let us know in the comments below!

Need advice on planning your next Disney vacation? Our friends at Academy Travel are EarMarked Diamond, check the link for more information.