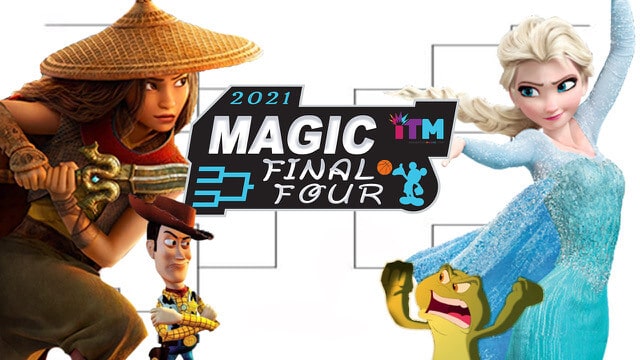 The 2nd half of 1st-round voting in Magic Final Four has officially begun! Get your votes in for films like The Little Mermaid, Ratatouille, The Lion King & Mulan.  Voting closes tomorrow night with the results announced on our live show Sunday, April 11th!  Be sure to fill out your own bracket to make predictions on who you think will take home the title.

Let’s take a look at some of the most intriguing matchups that you can now vote on!

Many of us believed we had seen the last of Woody and the gang when he said goodbye to Andy in one of Toy Story 3’s final scenes.  Pixar threw a curveball in 2014 when it announced everybody’s favorite talking toys would be returning for Toy Story 4 in 2019.  Each sequel to the 1995 classic eclipsed $1 billion at the box office while earning overwhelmingly positive reviews.  Did you like the 4th film enough to eliminate its older sibling from 2010?

The memorable “accepting their fate in the incinerator” scene still haunts me to this day.  The villain, the story, the ending, Toy Story 3 had it all.  I’ll go as far as to say it was the best ending to a franchise until Tony Stark snapped his fingers.

Winner plays the winner of 6) Up vs. 11) Alice in Wonderland

This all-Pixar matchup is sure to divide audiences as both films have strong fanbases, large box office numbers, and iconic characters.  Each movie’s success garnered at least one sequel and multiple attractions throughout Disney’s six resorts worldwide. The renowned RottenTomatoes.com gives Finding Nemo a significant edge with a 99% Tomatometer against Cars’ 74%, though Lightning McQueen’s film closes the gap on IMDB, trailing the site’s star rating by a score of 8.1-7.1.

Speed is vital in a 64-team tournament.  Lightning McQueen literally opens the movie by saying he is speed.  Seems pretty straightforward to me.

Winner plays the winner of 4) Zootopia vs. 13) Fantasia

Walt Disney Animation studios came out of the gate swinging in 1937.  Snow White, Pinocchio, Fantasia, Dumbo and Bambi set the tone for what would become nearly a century of successful animated films.  1942’s Bambi is often remembered for “The shot heard around the world” (I’m sorry), and its loveable characters make it one of Disney’s most adored classics.  Unfortunately, it heads into Magic Final Four against a film that possesses a newfound momentum like nothing we’ve ever seen.  The hilarious viral wave that was the Ratatouille Musical on Tik Tok has brought the 2007 Pixar masterpiece back into the spotlight.  Will this resurgence for Remy, the Ratatouille, the rat of all our dreams, be enough to take down Bambi?

The lack of respect Ratatouille had taken prior to the aid of Tik Tok always astounded me.  The concept and setting were so perfectly executed that it was always puzzling to me why it never seemed to reach the top of anyone’s list of best Pixar films.

Bambi on the other hand was my favorite movie from the age of 1-3 (crucial developmental years).  I still put Deer in my top 5 favorite animals specifically because of what the main character had to go through.  A true warrior.

Winner plays the winner of 1) The Lion King vs. 16) Meet the Robinsons

Tune into the live results show on Sunday, April 11th to find out who’s heading to the 2nd round. It’s Magic Season!

Here are some articles to help you out:

All 61 Disney Animated Classics and How To View Them

Your Favorite Disney Movie Can Say a Lot About You

The 24 Most Underrated Disney Movies of All Time

Who do you want to see win this year’s Disney Movie Tournament? Let us know in the comments below. 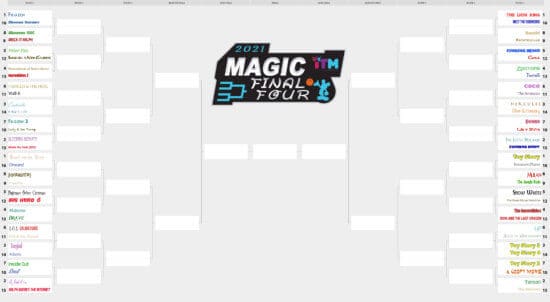 Plus be sure to check out:

A Complete List of New Disney Titles Coming in 2021!

Comments Off on Magic Final Four Round 1 – Voting Continues!