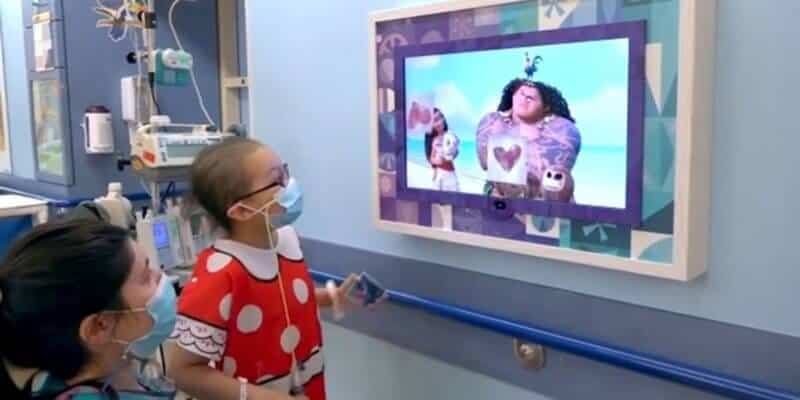 Growing up watching Disney’s classic animated films and visiting Walt Disney World as a child are memories I will cherish forever. As I grew into an adult and had children of my own, I instilled those memories in them and respected Walt’s vision to bring families together.

While some Disney Guests are preparing for upcoming Disney vacations, many families and children who love the world Walt Disney created live completely different lives. At New York-Presbyterian Morgan Stanley Children’s Hospital (NYP) in Washington Heights, many children are facing serious and unthinkable illnesses. Fortunately, Disney has committed to finding ways to relieve stress and anxiety to families and, especially, the children.

According to the New York-Presbyterian Morgan Stanley Children’s Hospital, “This commitment dates back to Walt Disney himself, who would visit with children in hospitals, often accompanied by Disney characters and animators.”

Since 2018, the Walt Disney Company has continued to walk in Walt’s footsteps by committing $100 million towards making hospitals more fun for children and less stressful for parents. This continued support will provide children happiness and let them focus on activities instead of their illnesses.

NYP is the latest hospital to benefit from Disney’s ongoing financial commitment to children’s hospitals.

In an ABC 6 article, Bernadette Khan, a nursing officer at the hospital stated, “Our ability to help children forget, even for a moment that they’re sick…is incredibility powerful.”

Children will be mesmerized by art installations and new playrooms throughout the hospital, all featuring Disney characters and Disney magic! With the help of the Disney Team of Heroes app, children will be engaged in stories, interactive magic murals, games, Disney trivia, and more.

In the same ABC 6 article, readers get to know four-year-old Sarah, who was born with her intestines extended outside her abdomen. The little girl from Long Island now enjoys playing in the new playroom instead of focusing on her intravenous line which provides nutrients for her all day.

Sarah’s mother shared that when her daughter was born, doctors “had to resuscitate her twice within like the first few hours of being born.”

She is now extremely grateful that Disney has given her daughter a chance to experience the magic that only they can make, even though she is still hospital-bound. And, although her daughter is ill, her mother is relieved that her daughter is alive and can now enjoy moments like interacting with Dory from Finding Nemo and Finding Dory on a digital touch screen at NYP.

“We actually took the entire hospital experience, broke it down to understand it, and identify those moments that were the highest stress moments throughout,”

We wish all the families in these hospitals the very best and hope with the commitment of Disney, it gives children hope, less anxiety, and more magic in their lives.

What do you think of Disney’s 100 million dollar commitment to Children’s hospitals? Let us know in the comments below!