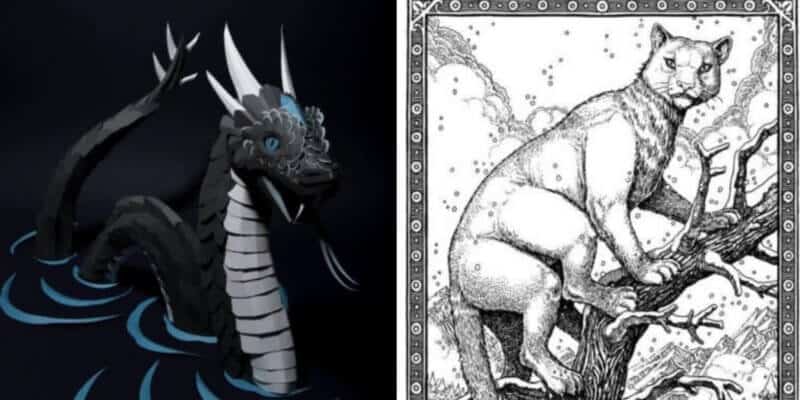 In the Wizarding World, the Ministry of Magic classifies magical creatures into three categories, beasts, beings and spirits. For a full guide on the magical creatures within the Harry Potter universe, you can click here.

In Scamander’s book there are few magical creatures characterized as the most dangerous classification, “wizard killers”. Here we will be taking a look at those creatures.

Acromantulas are monstrous spiders that originated from the island of Borneo in Southeast Asia. This creature lives in deep dense forests and is capable of human speech. Its body is covered in thick black hair and its legs can reach up to 15 feet in length.

Acromantulas live in colonies where the female is bigger than the male, and it can lay up to 100 large beach ball-sized eggs at a time. These carnivorous spiders feeds on big animals, which include wizards and muggles alike.

A basilisk, also known as the King of Serpents, is a wizard bread giant snake, can reach up to 50 feet in length. This magical creature is born when a chicken egg is hatched beneath a toad, producing this giant snake with extraordinarily magical powers.

As seen in Harry Potter and the Chamber of Secrets, the basilisk is very venomous, but its most extraordinary and dangerous ability is its yellow-eyed gaze. If anyone were to look directly into the basilisk’s eyes, they will suffer instant death.

Basilisks can only be controlled by Parselmouths, and can live close to nine hundred years. Due to their dangerous nature, the breading of a basilisk is prohibited by the Department for the Regulation and Control of Magical Creatures.

Dragons are very well-known creatures in muggle mythology, and probably the most famous of magical beasts. The female dragons are more aggressive than the males, but either should only be approached by a highly skilled wizard.

Dragons are valuable because their hide, blood, hearth, liver, and horn all have highly magical properties, for example, dragon heartstring is often used as a magical core in the production of wands.

Throughout wizard history, horned serpents are believed to be native to West Europe. Yet, different species of the creature been spotted in the Far East of the globe, and the largest and most diverse group of horned serpents is found in North America.

In West Europe, horned serpents were hunted to extinction by wizards in search of potion ingredients. The most valuable and prized species of the horned serpent has a jewel in its forehead which is believed to give the power of invisibility and flight.

The horned serpent gives its name to one of the houses of Ilvermorny School of Witchcraft and Wizardry, which is the North American Wizarding school.

The Lethifold is a rare creature that resembles a black cloak that glides along the ground at night. This creature is found in tropical climates and attacks its prey while they sleep, wrapping itself around the victim and suffocating them. Once the prey has been suffocated, the Lethifold digests it and exists the place leaving no trace of it ever been there or its victim.

Much like with a dementor, the only known spell to repel a Lethifold is the Patronus.

Menticore is a greek mythology character with the head of a man, the body of a lion and the tail of a scorpion. Like the Chimaera, the Manticore is extremely rare and dangerous. This creature’s skin is known to repel almost all charms and its sting causes instant death.

According to the book, Fantastic Beasts and Where to Find Them, written by Scamander, this East African creature “is arguably the most dangerous in the world.” Resembling a leopard, the Nundu moves silently around and its breath causes a disease  virulent enough to eliminate entire villages.

In Wizarding records, a Nundu has never been subdued by less than a hundred skilled wizards working together.

The Quintaped is a magical beast with a particular taste for humans. It lives in the northeast tip of Scotland, an island called Isle of Drear. These slow-slug, five legged, thick reddish-brown haired creatures are the reason why the Isle of Drear is unpopulated.

There is a legend in the Wizarding universe that says that the Quintaped were created from a Wizarding transfiguration spell that has never been reversed.

Looking much like a normal mountain lion or a cougar, the Wampus Cat is more dangerous than it looks. Native to the Appalachia mounts, this legendary creature can walk on its hide legs, outrun arrows, and its eyes have the power of hypnosis.

Like the Horned Serpent, the Wampus Cat is one of the houses of the North American Wizarding school, Ilvermorny.

Besides the ten dangerous creatures featured, there is one more that bears the classification XXXXX. Yet, labeling this being as a mare creature is controversial since it is also a wizard…

A Werewolf is a wizard, witch, or muggle that upon the full moon transforms itself into a wolf, or wolf like creature, with no human conscious. Werewolves are found worldwide, and a wizard will only turn into a werewolf if bitten by one. The werewolf actively seeks humans as its favorite prey. So far in the magical community, there is no cure for lycanthropy.

This dangerous creature is seen in Harry Potter and the Prisoner of Azkaban.

Which magical creature would you fear the most if you crossed paths? Let us know in the comments below.