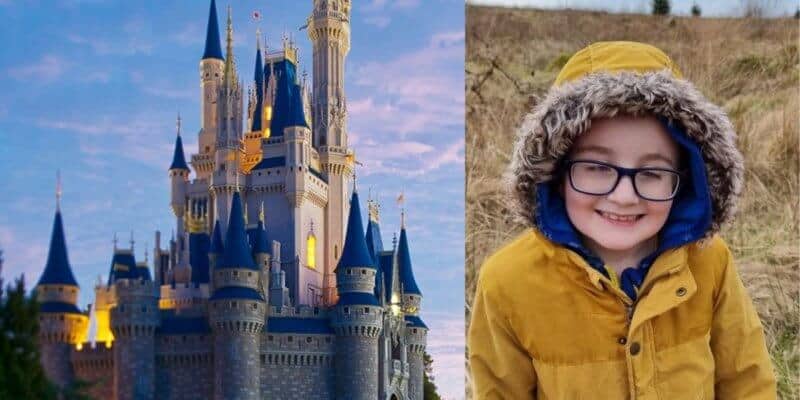 For some, visiting Disney World may be a common weekend getaway or a trip taken every year. For others, it may be just a dream that some really want to make into a reality for their family just to visit once in their lives.

One mother in the U.K. speaks out, in search of some support to make her son’s Walt Disney World dream come true before it’s too late.

As Walt Disney World prepares for its 50th anniversary celebration at all four parks, many Guests are preparing for future trips in the fall as celebrations commence in October. Currently, Magic Kingdom is completely booked for October 1 for theme park ticket holders, select Resort hotel Guests, and Annual Passholders.

One mother in the U.K. wishes that her 9-year-old son, Edward, can make it to Disney World this October before his condition worsens.

According to Belfast Live, Edward, a nine-year-old boy, has had problems with his sight since he was a baby and has now developed Retinal Dystrophy. His mother told the publication:

“We have only learned that [Edward] is partially sighted and that he has a number of eye disorders such as: myopia, reduced vision [in] both eyes, astigmatism and convergent squint and including a very rare disease Retinal Dystrophy which [in some cases] progresses to complete blindness. There is no cure and no treatment to halt this disease.”

Edward’s mother explains that making memories with her family is important, but this mom may have a difficult road ahead. She said:

“As a single mother of four children, it may take a few years to manage this. However, Edward’s eyesight may have deteriorated by then.”

Edward’s aunt also chimed in explaining her sister, Edward’s mom, is worried she won’t get the chance to give Edward his dream. She told Belfast Live:

“My sister is devastated and worried she won’t get the chance to give Edward the holiday of his dreams. We are trying to push for October this year with the hope some Covid restrictions will be lifted.”

Edward’s mother and aunt are hopeful with the help of the media, his dreams of visiting Disney World will come true before his eyesight has completely deteriorated. She states:

“I have seen the kindness and support in people with this stuff before and suggested that we put it out here to see if we can make this a reality.”

The nine-year-old boy searches Disney World attraction ride videos on YouTube quite frequently as he dreams of one day riding them himself. His mother explained:

“The way I look at it is [if he gets there], when he can’t see any more he will have memories to think about whenever he is blind.”

So far, the support of a local charity, Angel Eyes NI, and complete strangers has been a huge surprise to the family, and have since started a GoFundMe account for Edward. His mother says:

“It has been so amazing. There have been so many people. I got a phone call from a man who said he will sell his collectibles to raise money, and a student I know gave £200. It broke my heart, people are actually so, so nice.”

According to an Angel Eyes NI spokesperson, they explain:

“[We are] a local charity whose vision is to create a fully inclusive society for children and young people who are blind and partially sighted, so they can achieve their dreams, aspirations, and full potential.”

Our hearts go out to this family in the U.K.. We hope to hear an update soon and wish Edward that his dreams of visiting Disney World will become a reality as soon as possible!

If you would like to help in support of Edward’s dream to visit Disney World, visit the GoFundMe account here. For more information on Angel Eyes Ni, you can visit their official website here.

Do you have an extraordinary story to share with us? Let us know in the comments below!

Need help planning your next Disney World Vacation? Our friends at Academy Travel can help!