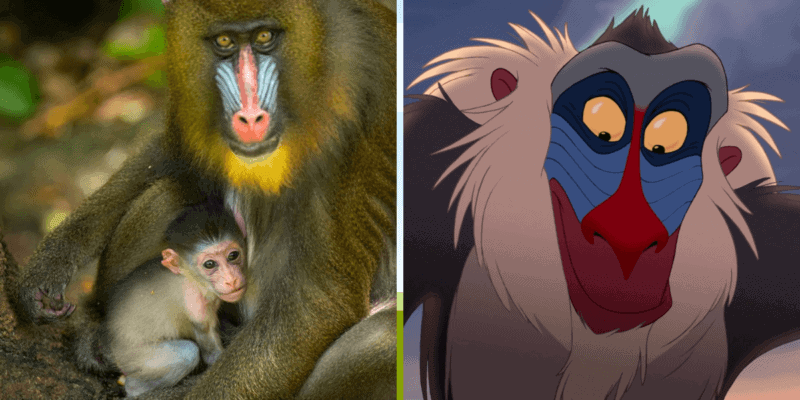 Today, the Disney Parks Blog shared that they had a new member of the mandrill family. A baby girl named Ivy was born at Disney’s Animal Kingdom to parents Hazel and Linus on April 10!

In the spirit of the mystical mandrill Rafiki, join us in honoring the circle of life as we celebrate the arrival of this adorable newborn. The little girl was born on Saturday, April 10, to first-time mom Hazel and dad Linus. Cast members named the infant Ivy to fit in with the rest of her colorful family – Olive, Scarlett, Snow and Hazel.

According to Disney, Ivy can be seen at Animal Kingdom on Kilimanjaro Safaris, most likely with her mom. Female mandrills take on most of the parenting tasks when it comes to newborns. They not only nurse the newborn but carry and groom the young baby. Mandrills will also groom each other to promote social bonding.

Disney Parks Blog also shared that Ivy is doing well and bonding with her mom:

We’re so excited to share this news and report that mom and newborn are healthy and bonding. Be on the lookout, because both have already been spotted by guests on Kilimanjaro Safaris. You might see the shy baby clinging to Hazel’s stomach, a natural bonding behavior. But this will change soon as the baby begins to walk within weeks of being born, spending most of the time walking underneath mom. The baby joins the troop of seven other mandrills that call Disney’s Animal Kingdom home.

This is only the most recent time that Disney’s Animal Kingdom Park has welcomed a new addition. In October 2020, resident white rhino Kendi gave birth to a baby boy. Two other white rhinos are currently pregnant at the theme park as well, which is welcome news due to how rare white rhinoceroses are.

October was a busy month for Animal Kingdom as they also welcomed a new baby giraffe, the second actually! A new baby giraffe was also born at the theme park in September. The baby giraffe’s birth was announced by Dr. Mark Penning, Vice-President of Disney Parks Animal, Science, and Environment division.

The giraffe family at Disney continues to grow with the birth of another Masai giraffe to mom Willow on October 20. The calf was quick to stand and start nursing, and weighed in at 160 pounds and just over six feet tall. ?
.
This baby is the second giraffe born backstage at @Disney’s Animal Kingdom in less than a month, so it’s keeping our team on their toes!
.
After this new calf enjoys bonding time with mom, she will join the herd on the savanna – usually in a few weeks. For now, the calf is nursing and staying close to mom.

We just can’t get enough of all of these adorable animals making their Disney debut!