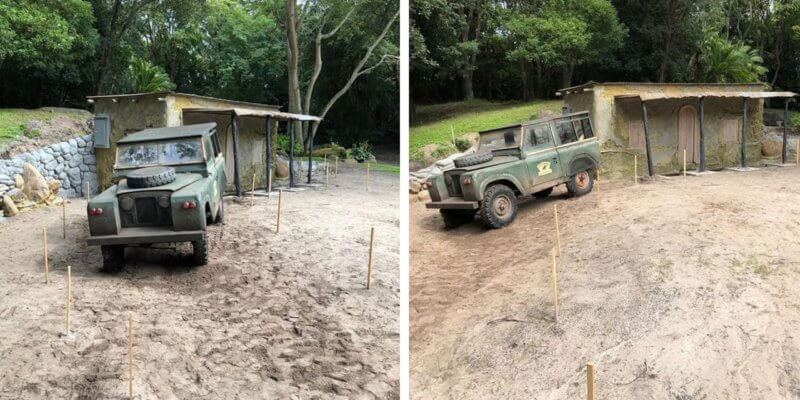 When any Disney Guest visits Disney’s Animal Kingdom for the first, second, or hundredth time, Kilimanjaro Safaris is a must-do attraction. Kilimanjaro Safaris the closest thing to a real safari that you’ll find at any Disney theme park. The attraction spans 110 acres and is home to 34 different species of wildlife. There really is no better way to get up close and personal with a giraffe in the morning, and then travel to the Cretaceous period by lunch, than at Animal Kingdom. And we are not kidding about the giraffe — this photo was taken this morning!

Good morning from the Kilimanjaro safaris! from WaltDisneyWorld

Back in August, Disney Guests began noticing an addition to the Disney attraction. A hut popped up with visible windows and doors. Fans, including myself, began wondering what this could be. Since then, many developments have been made to the structure and ITM is here and ready to report the progress to you!

The hut’s rustic columns have now been painted green and green moss work has been added to the facade. We can see that the building has been Imagineered to look weathered, as if it has been there for years. A truck has also been added to the scene with a Harambe logo detailed on the door to continue the attractions theming and storyline.

A closer look at the new truck addition.

More plants and greenery added around the hut. The dark colors of the structure in combination with the bright green plants balance out the scene well. Plus, that rock against the building kind of looks like an elephant to me, and I hope it was an intentional choice.

It seems there are sticks being placed around the newly finished structure and truck. This is likely to indicate placement for future construction. This could indicate that the area in front of the sticks will also have something done to it, but that is just speculation at this point.

It seems that although the construction of the new hut at Kilimanjaro Safaris is speeding up, there is still more work to go. We do not yet know what exactly the structure will be used for, but Disney has made sure it fits the landscape of the attraction very well. Stay tuned to ITM for more updated on the Animal Kingdom attraction!

What do you think this new hut will be used for? Let us know!