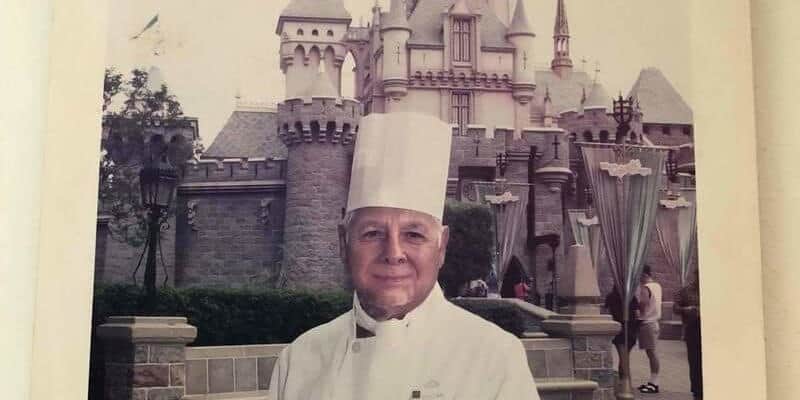 Roasted Turkey Sandwich and Walt’s Favorite Chili at the Happiest Place on Earth? Sign us up! Disneyland Resort’s Carnation Café is a Table Service restaurant serving classic American comfort food, including some of Walt’s favorite dishes. It’s been around so long that it’s now a Disneyland institution, along with its famous Chef, Oscar Martinez.

Disney fans who once petitioned to change the name of the Carnation Café to honor its longest-tenured cast member are now asking Disney to consider his moniker on a Main Street, U.S.A. window, where legends are honored.

In about 2017, Chef Oscar Martinez retired from The Walt Disney Company. His efforts behind the scenes consisted of nearly 60 years of culinary expertise, smiling over the counter at the Guest-favorite Carnation Café at Disneyland Park. According to the Disney Parks Blog, Oscar began working on December 29, 1956 – a year after the park’s opening. Oscar originally served as a busboy and later a grill cook in Fantasyland locations that sold hamburgers, hot dogs, and chili. Moving to the iconic Carnation Café in 1967, the enthusiastic Martinez started serving his famous breakfast potatoes.

In fact, Chef Oscar has a dish named for his “choice” entrée! The Oscar’s Choice: All-American Breakfast sells for $13.00 and consists of two eggs, any style accompanied by specialty Café Breakfast Potatoes served with hickory-smoked bacon or sausage, and your choice of toast.

Disney fans are so enamored with Chef Martinez’s contributions to the Disney legacy that they initially requested his workplace be renamed in honor of him. That café petition from 2020 requested Disney to change the name of the Main Street restaurant to “Oscar’s Carnation Cafe,” which encompassed both the restaurant’s original name, but also its top chef.

Now, Disney fans would love to see Chef Oscar Martinez’s name emblazoned on a Main Street, U.S.A. window where Disney legends are remembered forever. Below is an example of a Main Street Window, where Bill Evans is remembered for his horticultural contributions in the original park designs.

The window petition was started nearly two years ago but is now gaining steam and traction. The copy on the petition shares the Fan’s love for Chef Oscar and remembers his genuine kindness for each Guest. Quoted in the petition is Marty Sklar’s mentioning of how to get a Cast Member’s name on a window, taken from Wikipedia:  “to add a name today, there are three requirements: (1) Only on retirement. (2) Only the highest level of service/respect/achievement. (3) Agreement between top individual park management and Walt Disney Imagineering, which creates the design and copy concepts.”

You can add your name to the Oscar Martinez Main Street Window Petition here, which says:

After over 60 years of service, Chef Oscar retired from the Disneyland Resort in 2017.  If you’ve met him, you know that he is a prime example of a Disney Cast Member.  With kindness and genuineness, he has made a big impact on Guests and Cast Members since he hired in on December 29, 1956, and is more than deserving of a Main Street window to show how much we appreciate him!

Have you ever looked up at the windows on Main Street?  Or maybe you’ve seen them in Toontown?  These business decals are awarded to individuals who have contributed in some way to the parks.  To be deserving of a window, Marty Sklar has said, “”to add a name [on a window] today, there are three requirements: (1) Only on retirement. (2) Only the highest level of service/respect/achievement. (3) Agreement between top individual park management and Walt Disney Imagineering, which creates the design and copy concepts.”

Do you share the love for Chef Oscar Martinez’s contributions to Disneyland park? Leave us a comment with your favorite dish from the Café or fondest memory of Chef!