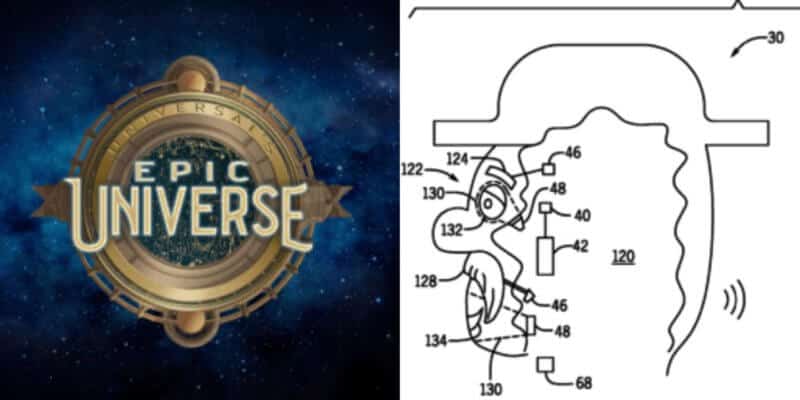 With the news of Epic Universe once again beginning construction, Universal fans can once again start speculating as well as continue to learn new details about the future third gate at Universal Orlando Resort.

One of the best ways to figure out what is coming next to any theme park is to take a look at patents that are being filed! Luckily, Universal releases their patents with great detail about technological advances that they are creating, they also visual renderings of the patent, which makes it fun to begin to try and place the new creation within one of the theme parks.

Because all of the new ride technology is likely going to Epic Universe, considering they have to build every aspect of the park, that is how we will look at this patent today. That being said, Universal could use this at Universal Studios as well as Universal’s Islands of Adventure, as well, and until they confirm what this technology will be used for we just won’t know for certain.

If you have been to a Universal theme park you have certainly seen characters throughout the parks. Some are people, puppets, and animatronics.  This patent however would enable Universal to create full animatronics that can interact with Guests as if they were real.

The latest patent filed by Universal is titled “INTERACTIVE ANIMATED CHARACTER HEAD SYSTEMS AND METHODS”. It seems that this patent is to develop the face of the character which will be:

The first image in the patent shows a character’s head, which would be animatronic. It seems that the character would have multiple greetings programmed, and will be able to recognize a Guest on its own and interact without assistance.

This would be fascinating because Universal has used objects and puppets such as Donkey from the Shrek meet and greet in Universal Studios, which respond to Guests, but a human controls the puppet and brings the voice to life. This new technology would seemingly skip the middleman altogether and allow for an animatronic to truly elevate the Guest experience at the theme park.

The below image shows how the animatronic is set to work. Here, we can see Guests interacting with the animatronic after they have experienced an attraction or dined at a restaurant. The animatronic will generate a variety of greetings to Guests.

So what do we think this animatronic could be for? On Twitter, a few Universal fans were discussing just this, and notably some raised the thought of the animatronic finding a home in the possible Donkey Kong area within Super Nintendo World seems like a fair assumption.

Reporter Alicia Stella shared the patent application along with her own question about whether there may be interactive character animatronics for a Donkey Kong area at Epic Universe.

It may be for the Rambi animatronic that you can kinda see in the model (if that model is real).

It may be for the Rambi animatronic that you can kinda see in the model (if that model is real).

The model Jummy refers to is that of a Donkey Kong area within Epic Universe, where, zoomed in, you can see there is likely going to be a Rambi animatronic in the area (if plans do not change). That being said, Universal’s patents are often quite accurate to what they are creating, and Rambi is not a human. This does not mean that it will not be for Rambi, but if it were, we might expect the rendering to look a lot more like the animal character.

Rambi also seems to be perched on a rock in this rendering, it would be cooler to see the animatronic able to move around its space, but we’ll have to wait and see what becomes of this new technology and the not-yet-announced Donkey Kong area of Epic Universe.

At the moment, all of this is just speculation, so it seems we will need to wait until either Universal announces more news on the technology, or until it is finally seen in Epic Universe (or one of the other theme parks). For all the up-to-date information on Epic Universe, click here.

What do you think this animatronic technology for? Do you think it is for Epic Universe?