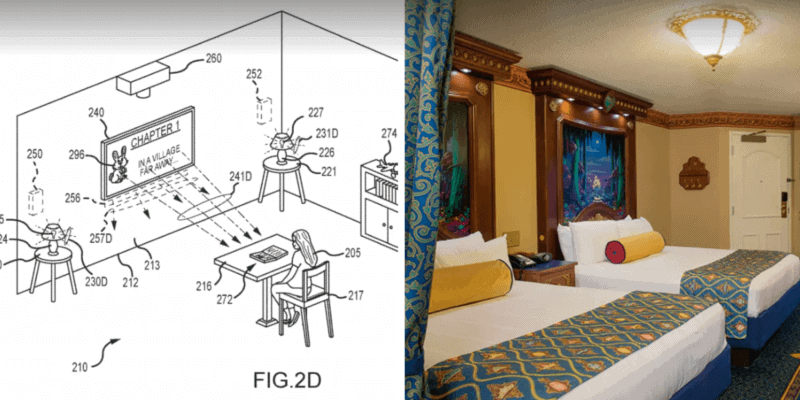 Disney has filed a new patent that will revolutionize hotel rooms across their resorts.

The Disney Patent, filed on February 9, 2021, is the newest design idea by The Walt Disney Company and requests to protect the idea of turning any room into a show. But if one reads the filed papers, they will find that this proposed technology mentions over and over hotel room use and how to engage a Resort Guest.

Disney notes that many Disney Resort hotel Guests are encouraged to leave their rooms, spending time in a Disney theme park, shopping districts, or in restaurants, but this new projector-based experience will allow Disney hotel Guests to potentially watch a story come to life in their own Resort room.

The patent is quoted:

“Conventional thinking in the hotel industry has been that it is desirable to make the guest very comfortable while they sleep but to otherwise encourage the guests to leave their room to partake in entertaining activities such as shopping and dining on-site or elsewhere in a resort.”

The patent’s brief “abstract” gives us a quick look at the basis of the document:

A show system or in-room entertainment or show system configured to provide engaging and immersive multimedia shows or presentations and nearly any space (or “room” and) that is defined by one or more walls. The in-room show system generally includes a controller for selectively operating a display device (e.g. a television or the like), a video projector, an audio system, (e.g. one or more speakers) and other show components (e.g. one or more lights, a fan, a mechanical device, and so on). Media content is predefined for the room and the controller operates (such as in response to triggering a switch or remote control device that may take the form of a show prop activate by someone in the room) to serve the media content to tell a story and/or magically transform the space into a multidimensional and immersive entertainment space.

How Will The Multimedia Shows Work?

While the first thought in our head when reading the Disney Patent abstract was to apply this technology to the parks, after reading the whole document it really seems that Disney is aiming to add this to Resort Hotel rooms.

Several diagrams show Disney Hotel Guests enjoying content in a room (at least one wall) with immersive elements like a fan, projector, lights, and images. The ” Media content is predefined for the room or is provided in real-time to suit the room, and the controller operates (such as in response to a triggering switch or remote control device that make take the form of a show prop activated by someone in the room) to serve the media content to tell a story and or magically transform the space into a multi-dimensional and immersive entertainment space.”

In the screenshot above, we see “Guest in Room 105” along with two devices. A room “prop” that acts as the remote control to turn the show on and off, as well as a client device” which acts as a second remote control. It is likely that the Prop (something like a magic lamp in the Port Orleans Riverside Princess Rooms) will act as an on/off switch for the room’s show.

At this point, these magical “fireworks” LED headboards have been a unique form of in-room entertainment. It looks as if Disney is sincerely aiming to increase these immersive elements.

Found on page/column 14, the Disney patent mentions a show controller acting to operate each of the show components in the show system in a time-synchronized manner to provide a multimedia show experience in the room.

The operations of the show components are time-synchronized along with the show’s timeline, and this may involve concurrent operations and/or sequential operations over time.

From the seemingly center of the room, the multi-angle projector (we’ve seen this with projection mapping) will create an immersive image environment, while fans cool the air (or perhaps heat it?), lights create a mood and sound echos from hidden speakers.

The time-sensitive and most probably synchronized show will have several “chapters” according to Disney patent diagrams, which means there may be a few “shows” with a Disney character to enjoy. In the below image, the Disney Guest enjoys a much more involved “Chapter 2” of their entertainment.

While the Riverside Princess Rooms are quite fun, we are still waiting to see the Star Wars Galactic Starcruiser immersive and entertaining offerings in person. It certainly seems that Disney wants to entertain Guests in their Walt Disney World Hotel as well as in the theme parks and shopping districts. (Perhaps this will be another reason to stay on property or choose a Disney vacation package?)

While Disney has only filed the patent for this “turn any room into a show” technology, it still remains to be seen IF they will use it and HOW. We’re hoping that as Walt Disney World Resort continues to expand offerings that many of their Resorts will offer this fun and immersive hotel room experience !

Would you stay in a Disney Hotel Room that offered a multimedia show? What stories would you want to see? Leave us a comment below!