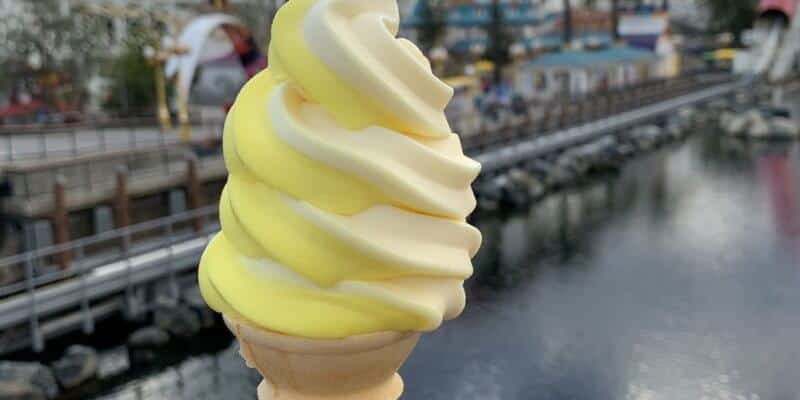 When we think of Disney, there is one thing that always comes to mind: we love our Disney treats! From churros to the Mickey Pretzel, there is no denying that Disney has come up with delicious classic treats that you can get only in the parks! And one iconic classic has gotten a complete makeover at Disney California Adventure Park is the Disney Dole Whip!

This classic treat is a pineapple soft-serve dairy-free ice cream dream. It was originally created by the fruit company, Dole, but became available at Disneyland’s Enchanted Tiki Room in Adventureland in 1986. Today, Disneyland also sells Dole Whip at the Tropical Hideaway, and you can also find this vegan and gluten-free treat in Walt Disney World at Aloha Isle and other locations on the Florida Disney property, as well.

One park has amped up this special treat recently and has included a new flavor combination at the Disneyland Resort!

Disney California Adventure recently announced that it will be reopening on April 30, and the park included a new way to enjoy the atmosphere with the A Touch of Disney event, which runs from March 18 to April 19 (for dining and retail only).  Our team at Inside The Magic recently visited the park and we knew we had to try the lemon-pineapple swirl Dole Whip treat, which was never available at DCA before this event!

Where Can You Find It?

In 2018, the new lemon Dole Whip flavor debuted at the Adorable Snowman Frozen Treats stand on Pixar Pier. This non-dairy lemon option became a fan favorite. But this month, in honor of the limited-time event at Disney California Adventure, Disney decided to bring pineapple Dole Whip to DCA for the first time, and they even added a lemon-pineapple swirl option. Currently at the Disneyland Resort, Adorable Snowman Frozen Treats is the only location where you can purchase this lemon-pineapple swirl in a cone!

These two combinations of tart and sweet have been a hit with Guests raving over this new Dole Whip snack at DCA.

So far, Disney’s event, A Touch of Disney, has been a huge hit, and many Guests are excited to return to the parks after being closed for almost a year! Rjay Taylor — better known as @_the_adventurous_rjay on Instagram — sent Inside The Magic this clip of his reaction to the lemon-pineapple swirl, and it’s pretty safe to say that he has been waiting for this Dole Whip moment for quite some time!

We’re anticipating excitement on April 30, when Disneyland officially opens, and we can enjoy some world-class treats we’ve missed so much! In the meantime, if you are one of the lucky ones who purchased a ticket to A Touch of Disney, make sure you head to the Adorable Snowman Frozen Treats on Pixar Pier and get your hands on this new lemon-pineapple swirl Dole Whip!

Have you been to “A Touch Of Disney” recently and enjoyed this new treat? Let us know in the comments below!

Planning on Visiting Disneyland soon? We can help! Click this link for more information!

Comments Off on A New Twist on a Disney Dole Whip: Lemon-Pineapple Swirl!