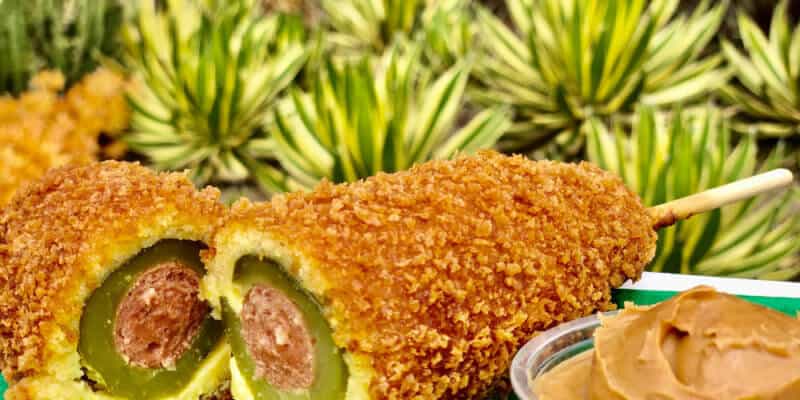 Disney fans all over the world love Disney treats. These iconic snacks have become so popular, Disney has celebrated this cult following by inventing Disney Ears that look like Mickey Ice Cream bars and Minnie Donut Ears.

One Disneyland treat has become so very popular to Disneyland Resort Guests. If you’re thinking of walking down Main St and picturing a little red wagon filled with long lines, then you’ve guessed it, we’re talking about the Corn Dog!

Corn dogs are a classic childhood treat and a Disneyland staple. Disneyland Corn Dogs is special on its own, it is said that a Disneyland chef invented an original batter recipe that you cannot find anywhere else, maybe that is why Disneyland’s corn dog stands out from the rest. The hand-dipped dog is made fresh with an all-beef hot dog center and comes with your choice of chips for an additional charge.

Since then Disneyland has created many versions of this treat for and one, in particular, has many people on social media talking. The Disneyland Panko Crusted Pickle Hot Dog located in Downtown Disney at the Blue Ribbon Corn Dog Cart.

Disney’s fans are very vocal when it comes to changing a classic Disney treat, and we recently viewed some comments that were on the fence with what they thought of this weird combo. Reporter Scott Gustin (@scottgustin) reacted to this new corn dog recently and was pretty comical asking if Disneyland was okay. Some Twitter followers reacted with mixed reviews, some actually wanting to try this new concoction, and others rejecting it.

Hey @Disneyland you ok? “A hot dog stuffed in a pickle with a panko crust and served with peanut butter.”

“A hot dog stuffed in a pickle with a panko crust and served with peanut butter.” pic.twitter.com/M2Igy9BL1a

I would definitely not eat this

I would definitely not eat this.

@helloitsdanie said she wants to try:

I don’t care what y’all think, so want to try this so badly

I don’t care what y’all think, so want to try this so badly. https://t.co/QYV5mpGucz

This Pickle Corn Dog is served with a side of peanut butter which some may find interesting and was featured in the Disney Parks Blog Best Bites article today.
Another Disney fan couple named @foodatdisneyland is reacting on Instagram and raving that corn dog enthusiasts should make their way to Downtown Disney since it is a limited-time offer. This corn dog retails at $13 dollars and is big enough to share. They also mention that even though it was the weirdest corn dog they have ever heard of, it worked for them and gave it a 4 out of 5 rating!

Attention pickle people – this ones for you. It’s a panko crusted corn dog wrapped in a pickle with a hot dog inside, served with peanut butter to dip. I’ll say this – this sounds like one of the weirdest corn dogs I’ve ever heard of, BUT it worked for me! Who would have thought? The peanut butter was not the best peanut butter but it worked alright when I was able to get some of it on my corn dog. It tastes good without the peanut butter. Overall though it gave me corn dog and fried pickle vibes. 4/5 rating – the biggest detractor from my perspective is the price tag. It’s big and definitely shareable, but that’s still on the high end price wise. You do get a bag of Lays potato chips with it, so there’s that. I’m glad I tried it even if it sounded a little strange to me ??. Would you try this? Happy Monday foodies!

@practically_perfect_every_bite on Instagram writes that she made her way to Downtown Disney for a friend that couldn’t try it out due to unavailability. She shares her reaction and agrees that this combo of Pickle and Corn dog is pretty good.

This one is dedicated to @tragickingdompins because you wanted to try it out but it wasn’t available so we did the hard job of coming back and trying it for you?? happy to report it’s actually pretty good. Now it does come with peanut butter dip and if you don’t think about it well it’s a great treat but if you think too much about the fact that you’re dunking a panko crusted pickle dog well it’s gonna be a hard one? Find it over the @blueribboncorndogs at #downtowndisney on your next trip!! It’s worth giving it a try!!

Although Inside the Magic has not yet tasted this creative dog, we look forward to seeing many more reactions to this bizarre treat. Disney’s treats will stay close to our hearts, and we look forward to seeing how Disneyland chefs and stands will create new and inventive snacks in the future. But for now, we’re left with this mixed review and wonder if this pickle hot dog will be popular enough to stay.

Have you tried this new take on Disneyland’s Corn Dog? And If not, are you making plans to go? Let us know in the comments below

Need help planning your next Disneyland vacation, we can help!