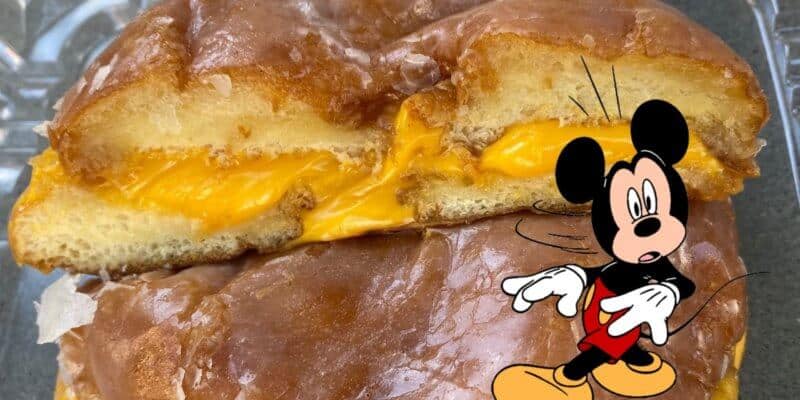 Sweet vs. savory — the ultimate battle foodie palettes must undergo when deciding what to eat next. When at Disney Springs, Guests are often able to have their pick of the litter when it comes to a sugary treat or a salty snack! But what if you crave both, at the same time?

Everglazed Donuts & Cold Brew is one of the newer food locations to have opened in Disney Springs and offers a multitude of caffeine-inducing cold brews and sugar coma donuts that can make a sweet tooth salivate. The location also offers savory breakfast sandwiches as well as a concoction that combines the best of both worlds: cheese and sugar.

And, what may surprise you is that Guests can order a donut turned grilled cheese from Everglazed Donuts! As someone who loves both donuts and cheese (especially in melted form), this option sounds like the perfect snack to eat between meals. But also, it sounds like it may be a huge mistake in the making.

Everglazed Managing Director Mike Crave stated, “We knew we wanted a couple of savory sandwiches to compliment the sweet donuts, and what’s better than a classic grilled cheese with a twist? It’s comfort food, it’s nostalgic, and it’s the king of variations when it comes to sandwiches.”

Everglazed offers their Grilled Cheeeeeese at $6 which comes on a soft, sweet, round bun (similar to a Hawaiian roll) and is topped with 4 slices of American cheese. However, for $1 more, foodies can challenge their comfort levels and replace the bun for a toasted glazed donut. But the big question remains, would a donut grilled cheese be delicious or disgusting?

Although no one at Inside the Magic has yet to taste Everglazed’s version of the donut grilled cheese, ITM reporter Lindsey Paris has had a version of this creation and said that it was delicious! That being said, I personally look forward to trying the cheesy donut shortly — even if it may be against my better judgment.

If you want to book a Disney World vacation and give this grilled cheese donut a taste, why not start planning the magic today? Click here to begin booking!

Would you eat a grilled cheese donut? Or does this combination make you want to take a pass?