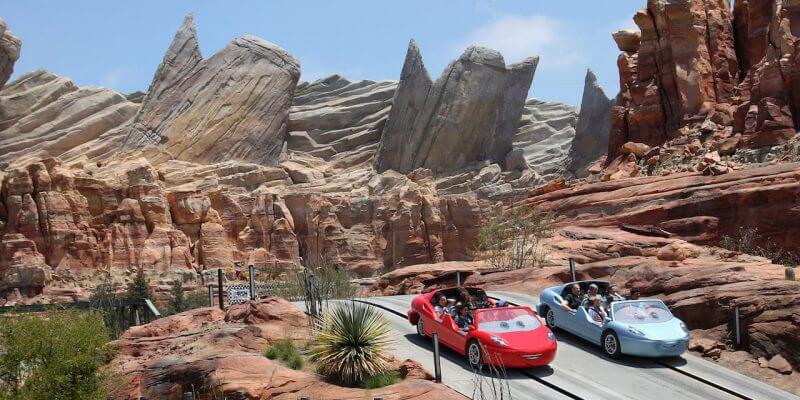 Disney California Adventure Park is continuing to test rides ahead of its April 30 reopening!  Both Radiator Springs Racers in Cars Land and Toy Story Midway Mania on Pixar Pier were seen operating to make sure everything is running smoothly.

It was previously reported that the Incredicoaster was seen running in preparation for Guests. Now, those who are visiting Disney California Adventure theme park for the limited-time ticketed event, A Touch of Disney, can get a glimpse of multiple attractions being tested, which is a real treat since Guests are not allowed to ride any attractions during the event!

Guests attending A Touch Of Disney Event were treated to seeing the cars at Radiator Springs Racers in Cars Land racing each other around the track.

Radiator Springs Racers opened in Cars Land on June 15, 2012, and became an instant hit. The attraction tends to boast hours-long wait times but also offered both FASTPASS and a single rider line in pre-pandemic times. FASTPASS will not be available when the park opens, however.

Also seen being tested was Toy Story Midway Mania attraction.  Opening in 2008 as a part of Paradise Pier, the ride became incredibly popular with Guests.

The Toy Story film franchise’s influence continued to expand in Disney California Adventure with Jessie’s Critter Carousel and a Buzz Lightyear churro cart being added when Paradise Pier was transformed into Pixar Pier in 2018.

There has been no official announcement from Disney on what specific theme park rides will be open to Guests when the parks reopen, but based on the ride testing, it seems that Radiator Springs Racers and Toy Story Midway Mania will be a part of the opening group. We’ll update Inside the Magic when more information becomes available.

For Guests who do not have A Touch of Disney ticket, Downtown Disney is still open to them for visitation, with paid parking in the Simba lot available.

Will you be sure to ride Radiator Springs Racers and Toy Story Midway Mania when the park opens? Let us know in the comments below?

Looking to book a Disney Parks vacation? Let our friends at Academy Travel help you out!  CLICK HERE to get started!