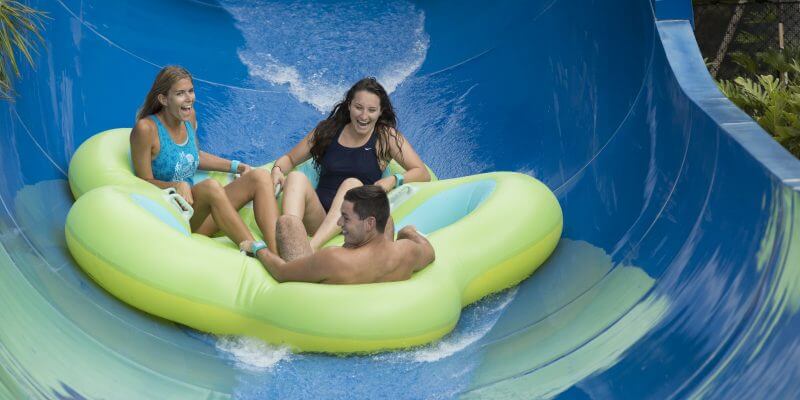 Universal opened a brand-new water theme park, Volcano Bay, back in 2017. Since Volcano Bay opened it has had its fair share of lawsuits. Recently we reported that a lawsuit in which a Guest broke their neck on a water slide was settled. Could Guests see changes be made to the water theme park when it reopens on or before March 1?

One change that is possible to come is more weight restrictions for the Volcano Bay water park attractions.

Before your party can ride most attractions at Volcano Bay, you are weighed, although the weight limits for various attractions have been raised and lowered over the past few years.

You can read Universal’s full guide to Volcano Bay attractions accessibility that lists the current weight restrictions in a PDF here; however, from my own experience, I can say that sometimes these change, so it’s important to ask a Team Member when you visit.

During an injury lawsuit from 2020 that was filed by James Bowden who was injured on a water slide at Universal’s Volcano Bay theme park we got some details about injuries caused by riders being “heavier adults”. In the lawsuit, Bowden’s lawyer gave this statement in regards to Punga Racers, the attraction that Bowden was injured on:

Bowen’s attorney David Buckner argued Universal knew for years there were problems on the ride but did nothing to fix it, leaving it open to the public. He called it a “physics problem” — riders, primarily heavier adults, traveled too fast as they passed through a wave of water at the end and into a runoff that wasn’t built long enough to slow them down safely.

A judge ruled in favor of Bowden in the case, which is what leads us to believe that more weight restrictions could be put in place for not only Punga Racers but other ProSlide (the company that created Punga Racers) attractions that are found at Volcano Bay

Currently, Punga Racers is listed on Universal’s official website as having a maximum weight limit of 300 pounds. It is possible that when Volcano Bay reopens Guests could see an update to this weight restriction, if the attraction reopens at all.

Universal has not confirmed if any changes will be made to weight restrictions as of yet. We will have to wait and see when the park reopens in 2021.

So what do you think? What changes do you think could be made when Volcano Bay reopens? Let us know in the comments!

We can help you book the perfect Universal vacation — click here for more information!

Comments Off on Volcano Bay Lawsuits Settled – Will Universal Change the Park?