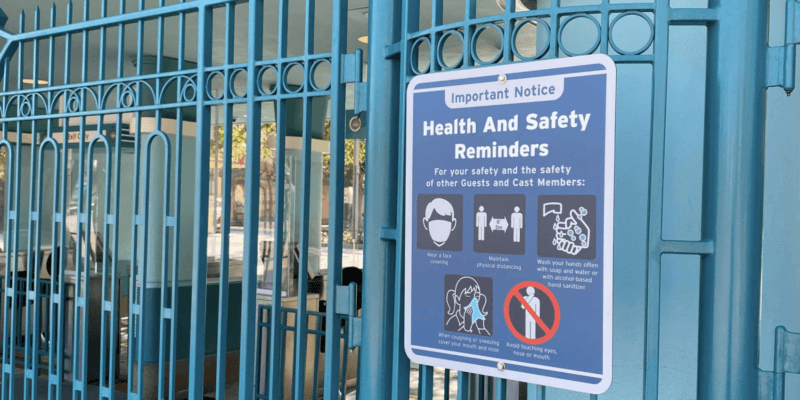 Just as Disneyland’s vaccination site was ramping up after hitting their 100,000 vaccination milestone, an unfortunate delay has occurred.

According to local Southern California news source Voice of OC, “Orange County’s mass Coronavirus vaccination site at Disneyland will close temporarily, due to severe weather across the U.S., which officials say has delayed local deliveries of vaccine supplies.”

The vaccination site — located at the Toy Story parking lot at the Disneyland Resort just a few blocks from the theme parks — temporarily closed down previously due to weather but reopened within the same week.

It was announced that on Tuesday, “Severe weather across the country delayed delivery of COVID-19 vaccine supplies across the State of California, including to Orange County. As a result, Moderna vaccine inventory is very low. State guidance encourages dispensing all vaccine supplies as quickly as possible and does not allow for maintaining a large inventory in reserve.”

Unfortunately, the Disneyland vaccination center primarily distributes the Moderna vaccine, so their supply is not only low for first-time vaccinations against the COVID-19 virus, but for those looking to receive their second dose, plans will have to change. That being said, it seems that even if some who are scheduled to receive their second dose are at all delayed, the Moderna vaccine will still work just as well.

The Moderna vaccine’s second dose is typically given after one month with a “grace period” of four days. However, “the CDC says second doses of the vaccines may be administered up to six weeks (42 days) after the first dose.”

Those looking to get their second dose of the Moderna vaccine need not worry, as Disneyland Resort Cast Member Union Workers United Local 50 has announced the following:

Vaccinations update for those who have received it or about too.

To increase vaccination capacity, effective February 24, everyone who received their first dose of the Moderna vaccine at the Disneyland Super POD will receive their second dose at the Anaheim Convention Center Super POD. The Disneyland Super POD will continue dispensing first and second doses of the Pfizer vaccine to those with appointments.
The County is operating a vaccine POD site (not a Super POD) at Santa Ana College to vaccinate eligible residents in disadvantaged communities who are highly impacted by COVID-19 cases. The Santa Ana College POD will operate five days a week, Tuesday – Saturday from 8 a.m. – 5 p.m. and vaccinate approximately 1,000 people per day.
The County Super PODs and mobile clinics are not the only options to receive a vaccination. Other healthcare providers approved to dispense the vaccine, including hospitals, pharmacies and health clinics, play an essential role in vaccinating Orange County’s population.

Those who will need to be rescheduled will have received notice.

Vaccinations update for those who have received it or about too.To increase vaccination capacity, effective February…

As we previously reported, from the moment the Disneyland vaccine site opened, healthcare workers have exceeded expectations. The goal in the first three days of the opening was to administer 3,000 vaccinations, and the super POD surpassed 10,000 and also made over 60,000 appointments instantly. The only reason the site did not administer more was due to supply.

As mentioned, the parking lot that is currently hosting Orange Country’s super POD is the Toy Story lot, which is a few blocks from Disneyland, Disney California Adventure, and the Downtown Disney District. At the moment only Downtown Disney (and by extension, Buena Vista Street) is currently open due to Governor Newsom’s theme park reopening guidelines amid the ongoing pandemic.

It should be noted that the Disneyland vaccination center is open to appointments only. Those looking to get their COVID-19 vaccine cannot just show up but instead must make an appointment through their employer or doctor if qualified. The vaccination site is also only open to Orange County residents or to those who work in Orange County — more information can be found here.

As the vaccination center at Disneyland Resort (and others throughout the state) continues to distribute COVID-19 vaccines in the coming months, it could only help with the reopening of Disneyland and Disney California Adventure.

What are your thoughts? Let us know in the comments.